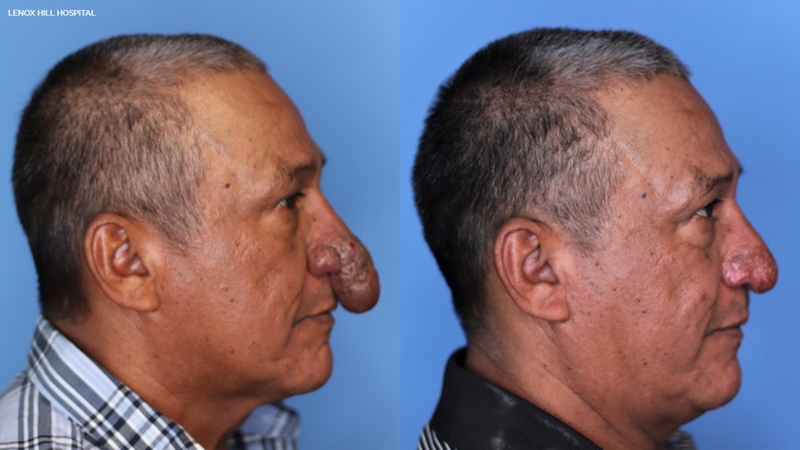 NEW YORK -- A painter from New York who was embarrassed about a growth on his nose had his luck turn around when he started a job at the home of a world-renowned plastic surgeon.

Conrado Estrada, 57, noticed what he thought were pimples on his nose six years ago, and they were growing quickly.

Estrada said people would stare and point at him in public, and the growth also made it hard to breathe, especially while working.

"I felt bad - I felt bad because when I went out, people stared at me, and it was a burden for me," Estrada said through a translator on Wednesday.

Over the years, various doctors prescribed drugs or treatments that did little to help.

He finally caught a break when he started a job at the home of Dr. Thomas Romo III late last summer. Romo is the director of facial plastic surgery at a hospital in New York City.

Romo spotted him across the yard and surprised him by inviting him inside and telling him the condition he had was actually called rhinophyma, and he would fix it for free.

"I said, 'wow this poor guy, with the way health care is everywhere, he'll never get this treated because, one, there are so few people who know how to do it, and, two, they'll claim it's cosmetic, or he's gonna have to pay for it,' and I said, 'screw that, we're going to take care of this guy,'" Romo said.

A California family had a double celebration for the new year after welcoming twins, who now have a unique story to tell about their birth.

Rhinophyma is a form of rosacea in which oil glands and connective tissue on the nose grow uncontrollably.

"I was overjoyed when doctor said he would help me," Estrada said. "At first, I thought it was a joke - but when the process began, taking photos, filling out medical forms, medical exams, COVID vaccine, then I knew it was happening."

The deformity was impacting his eating, breathing, speaking and socialization.

Romo performed the two-hour surgery a couple of months later to remove the malfunctioning glands and recontoured Estrada's nose.

"To see him beaming and standing up strong and being proud was really something else," Romo said.

Estrada feels great post-surgery and said he is thankful to Dr. Romo and his staff.