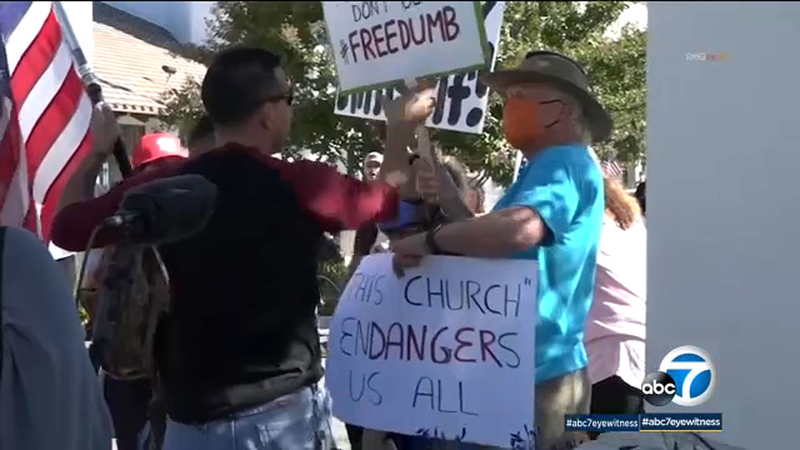 The planned services at Godspeak Calvary Chapel drew a group of counter-protesters, who gathered outside the church to speak out, saying the service would not require congregants to wear face masks or physically distance.

Tensions escalated when a small altercation broke out between a woman named Beth and another man who, she told Eyewitness News, tried to take away her sign.

The woman could be heard screaming during the scuffle, in which a man appeared to be trying to take away her sign. Footage at the scene shows the woman falling over onto the ground.

Tensions boiled over outside a Newbury Park church that defied a Ventura County judge's orders and held indoor worship services Sunday morning, despite state and local public health measures requiring that gatherings be held outside.

Church security said the man in question was not part of the congregation and was told to stay on one side of the sidewalk or he'd be asked to leave. The situation quickly calmed down and the woman was expected to be OK.

Pastor Rob McCoy has been adamant about holding worship services and says it just isn't feasible to hold them outside. The service began at 9 a.m. and the pastor warned those in attendance that they could be cited. Two more services throughout the day were also scheduled to be held.

A judge on Friday issued a two-week temporary restraining order banning the church from holding services indoors. A hearing is scheduled for Aug. 31.

The county had sued the church, arguing that it threatened public safety, but the church has argued that the health risk is small and that the orders violate freedom of expression. McCoy said that no COVID-19 cases have been reported to him by congregants.

"The point is, it doesn't affect all the city. Of the 80 plus victims, over 70 of them are above 65 with comorbidity," the pastor said, referring to the simultaneous presence of two chronic diseases or conditions in a patient.

The county's public health officer, however, says the risk of spreading the virus increases significantly when people from different households gather.