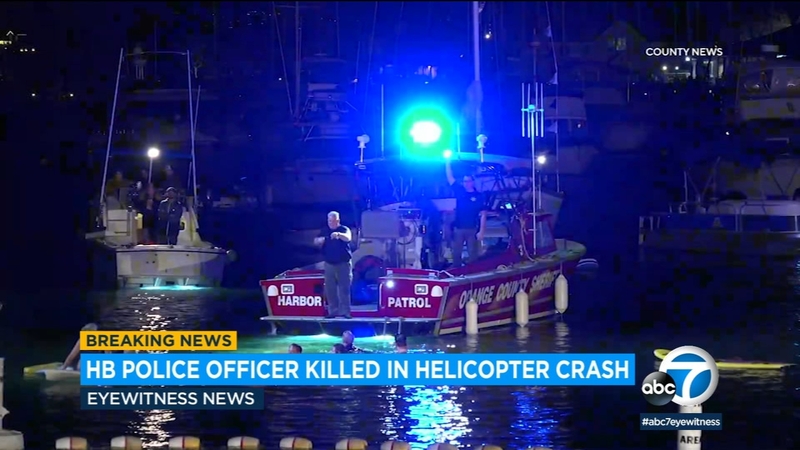 NEWPORT BEACH, Calif. (KABC) -- A police helicopter crashed in the waters off Newport Beach in Orange County Saturday night fatally injuring one of the pilots, and seriously wounding another.

The crash happened shortly after 6:30 p.m. Two pilots were on board at the time of the crash, and became trapped in the wreckage, according to officials. Both were rescued and taken to the hospital.

The Huntington Beach Police Department confirmed that it was their police helicopter that crashed.

We can confirm that our police helicopter, HB1, crash landed in the Newport Beach area. Rescue efforts are underway & more information will be released when available.

It is with tremendous sorrow that we announce the passing of Officer Nicholas Vella, a 14-year veteran of HBPD. Officer Vella died this evening after our police helicopter, HB-1, crashed into the waters off Newport while responding to a call for service. (1 of 3) pic.twitter.com/mxulAf248Q

Officer Vella leaves behind a wife and daughter.

A second helicopter crewmember, a 16-year veteran with the Huntington Beach Police Department, remains in the hospital in critical condition, according to officials.

Parra said the helicopter was heading to a "disturbance fight call" in Newport Beach at the time of the crash. It's unclear who was piloting the aircraft at the time.

A police helicopter has crashed in the waters off Newport Beach Saturday night.

"All of a sudden I hear something sputtering, really close," a woman who saw the helicopter go down told Eyewitness News. "And it didn't sound like a regular helicopter. And somehow, he managed to get it into the bay to save everybody's life, because if he had landed on a house, there would be a lot of casualties. I feel very fortunate right now.

Another witness told ABC7 that they saw the helicopter spinning and descending rapidly into the water.

The NTSB is investigating the cause of the crash.