"This is truly a heartbreaking time for all of us here at Huntington Beach," said Mayor Barbara Delgleize.
KABC 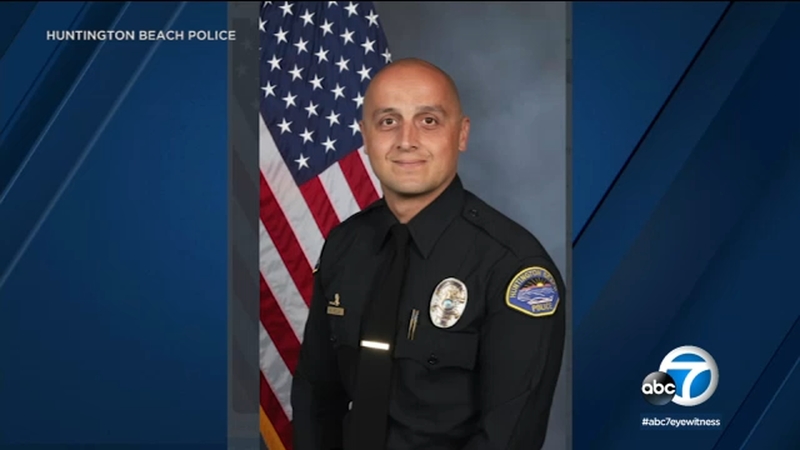 NEWPORT BEACH, Calif. (KABC) -- A 14-year veteran of the Huntington Beach Police Department was killed and another officer was critically injured after a police helicopter crashed near Newport Beach in Orange County Saturday night, authorities said.

"And after returning from that flight, the pilot reported that they were encountering mechanical difficulties," said Elliott Simpson, from the National Transportation Safety Board. "So a few seconds later, he transmitted that they were going down."

It is with tremendous sorrow that we announce the passing of Officer Nicholas Vella, a 14-year veteran of HBPD. Officer Vella died this evening after our police helicopter, HB-1, crashed into the waters off Newport while responding to a call for service. (1 of 3) pic.twitter.com/mxulAf248Q

The Los Angeles County Sheriff’s Department sends it deepest condolences to the @HBPoliceDept for the loss of Officer Nicholas Vella.

Our thoughts are with your agency and Officer Vella’s family, friends and colleagues during this time of mourning. pic.twitter.com/TpSgcR6hJF

The second officer, who is a 16-year veteran with the department, was taken to the hospital in critical condition. He wasn't immediately identified, but according to a tweet posted by HBPD Sunday morning, he has been released from the hospital.

"Thank you to our HB community & law enforcement family for the love & support you continue to show Officer Vella's family & our Department," read the tweet.

We wanted to inform everyone that the second officer involved in last night’s crash has since been released from the hospital.

Thank you to our HB community & law enforcement family for the love & support you continue to show Officer Vella’s family & our Department. pic.twitter.com/sTmGarGts6

Vella leaves behind a wife and a teenage daughter.

It's unclear who was piloting the aircraft at the time of the crash. One of the pilots was acting "as pilot in command, and the other acting as a tactical flight officer," Simpson said.

A police helicopter has crashed in the waters off Newport Beach Saturday night.

Late Saturday night, a procession was held for Vella in Santa Ana.

Hundreds of police officers were saluting outside of Orange County Global Medical Center as his body was being taken to the coroner's office.

The video above shows the processional of police vehicles and motorcycles at the Orange County Global Medical Center shortly after the deadly helicopter crash.

"This is truly a heartbreaking time for all of us here at Huntington Beach," said Huntington Beach Mayor Barbara Delgleize. "Our community values our police department, and the loss of an officer hits us all really hard. This tragic accident serves as a reminder of the danger, and the risks, our police officers put themselves in on a daily basis to protect our community."

"We have a lot of helicopters flying around, but this had a higher pitch to it," one witness said. "It didn't sound right. I looked outside and saw it going in circles."

One woman told Eyewitness News she saw the helicopter spinning and descending rapidly into the water.

"All of a sudden, I hear something sputtering really close, and it didn't sound like a normal helicopter," she said. "Somehow, he managed to get it into the bay to save everybody's life. If he had landed on a house, there would be a lot of casualties. I feel very fortunate."

The NTSB and the Orange County Sheriff's Department Major Accident Reconstruction Team are investigating the crash.

The NTSB is investigating the crash Sunday of a McDonnell Douglas MD 500N helicopter in Newport Beach, California.