A look at the proposed new Sixth Street Bridge

KABC
By John Gregory
DOWNTOWN LOS ANGELES (KABC) -- Officials behind the demolition of the historic Sixth Street Bridge released an animated rendering of what the new bridge will look like once the construction is completed.

The animated rendering shows the proposed design for the new bridge, which is expected to be finished in 2018 and opened in 2019. Officials said it will look similar to the original.


The bridge, which connects Boyle Heights and downtown Los Angeles, was officially shut down for demolition on Wednesday.

Hundreds gathered Tuesday night to say their final goodbyes to the iconic piece of the Los Angeles landscape built in 1921.

What was supposed to be a last chance for a final picture on the bridge turned into a mob scene. Someone fired off a smoke bomb and police moved in to break up the crowd. One person was arrested for disobeying police orders.

Once the crowd cleared, the closed signs and fences went up.


The Sixth Street Bridge has appeared in movies and TV shows. Even with it set for demolition, the cast of the show, "Ray Donovan" was scouting the area for an upcoming episode.

"We've shot a lot of stuff on this. I did two movies on here - one was 'Batman and Robin,' the other one was 'Nothing to Lose,' a bunch of TV shows. Gonna miss it," said John Radulovic.

The bridge is over 80 years old and it shows. Engineers say it's also no longer structurally sound.

The new Sixth Street Bridge will offer the same dramatic views of downtown Los Angeles - but it's not going to be cheap. The project will cost $449 million.

"The majority of the funding is coming from the Federal Highway Administration along with Caltrans and the city," said Gary Lee Moore, a Los Angeles city engineer.

The 2.5 mile section of freeway is expected to be reopened on Feb. 7 at 2 p.m. To help ease traffic, troopers will be on hand and detour signs will be posted along the route.

For more information about the demolition, visit www.sixthstreetviaduct.org. 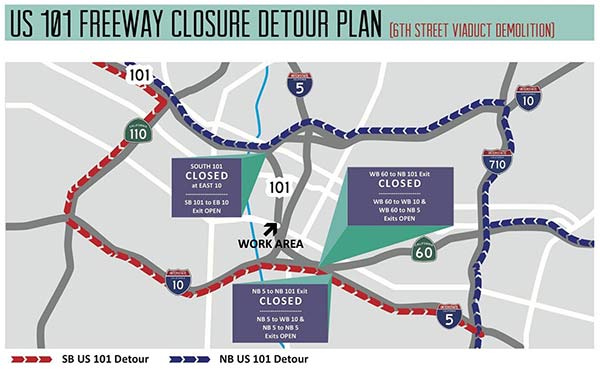 A map shows detours for commuters during the 101 Freeway closure during the demolition of the Sixth Street Bridge. 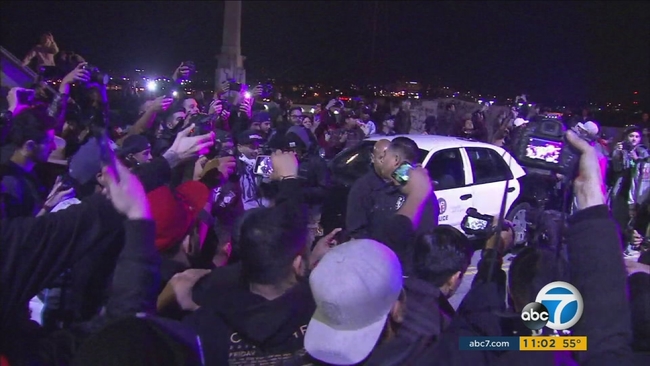