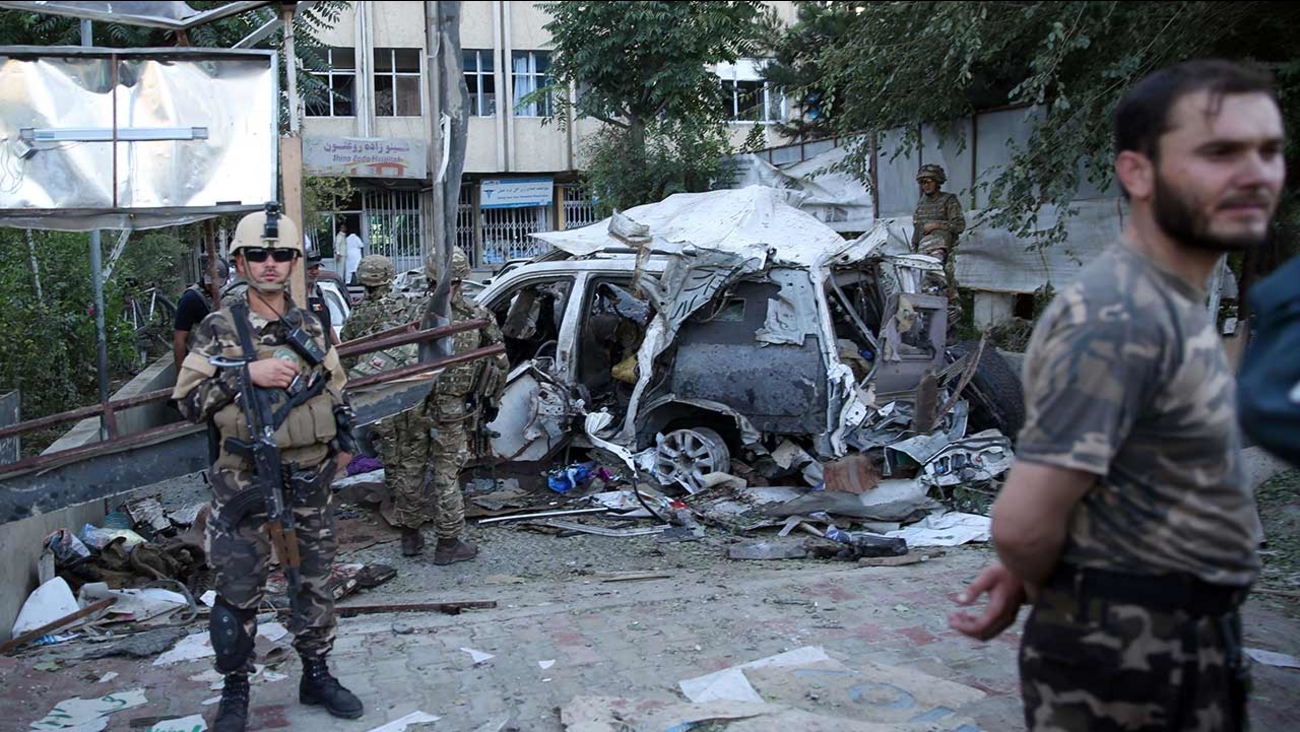 Afghan security forces and British soldiers inspect the site of a suicide attack in the heart of Kabul, Afghanistan, Saturday, Aug. 22, 2015. (Massoud Hossaini)

KABUL, Afghanistan -- A suicide car bomber attacked a NATO convoy traveling through a crowded neighborhood in Afghanistan's capital Saturday, killing at least 12 people, including three civilian contractors for the international military force, authorities said. At least one among of the dead was a foreigner, Afghan officials said.

The Taliban quickly denied it was behind in the attack in Kabul's Macrorayan neighborhood, though the militants increasingly have been targeting Kabul in recent weeks and often don't claim attacks that maim civilians.

The attack struck near the private Shinozada hospital, the sound of the powerful blast roaring throughout the capital. Ambulances and Afghan security forces quickly surrounded the blast site, blocking access off from about 1 kilometer (half a mile) away.

The bombing killed at least 11 Afghan civilians and one foreigner and wounded 66, said Wahidullah Mayar, a Health Ministry spokesman. U.S. Col. Brian Tribus, a NATO spokesman, said three civilian contractors had been killed in the attack, without elaborating.

Conflicting information is common after such attacks.

At least one armored vehicle in the convoy had been destroyed by the blast. It wasn't clear how many cars were in the convoy, though it is often several given security concerns in the capital.

The blast struck as schools were letting out for the day in Macrorayan, a Soviet-built housing estate lined with shops, hospitals and schools. Najib Danish, a deputy Interior Ministry spokesman, said the attack destroyed more than a dozen civilian vehicles parked in the street and passing by.

"A lot of dead bodies and wounded victims were there after the explosion happened in the area," said Mohammad Hussain, who was wounded in the attack. "There were a lot of casualties."

No group immediately claimed responsibility for the attack. In a tweet, Taliban spokesman Zabiullah Mujahid denied his group was responsible.

However, the Taliban has stepped up its assaults on Afghan security forces since U.S. and NATO troops ended their combat mission in the country last year. The militants also have launched a series of attacks in Kabul in recent weeks following Afghan authorities announcing the death of Taliban figurehead Mullah Mohammad Omar. Their targets have included foreign military and civilian convoys.