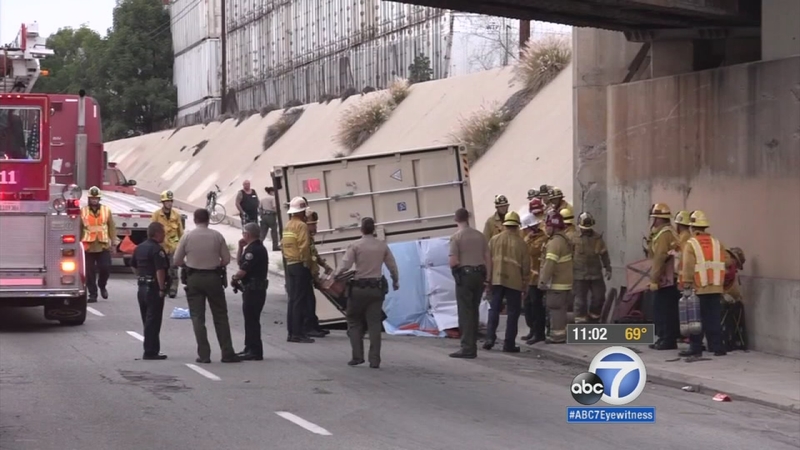 LONG BEACH, Calif. (KABC) -- A man riding his bicycle was crushed to death when a giant cargo container suddenly slid off its transport truck in Long Beach on Tuesday.

The accident happened at about 5:05 p.m. on Santa Fe Avenue near Warnock Way, according to the Los Angeles County Sheriff's Department's Carson Station.

Alva captured the scene on Monday when another cargo container fell off a flatbed truck, but no one was hurt.

On Tuesday, it turned deadly. It's unclear what caused the container to come off the truck, but it happened just as the driver was passing the man on his bike. The victim never had a chance. The coroner's office has only identified him as an Asian male.

Alva says he believes trucking companies are cutting corners because truck drivers who haul the cargo are on strike at the ports of Los Angeles and Long Beach.

"Right now, since we're on strike, the 18-wheelers aren't taking out the containers. I'm assuming that they're hiring those flatbeds because yesterday it was a flatbed too," said Alva. "Those containers weigh from 40,000 and up. They just strap them on with straps, and they basically tear off."

"What we've got happening here is drivers who are paid by the load instead of by the hour, and so they're just having to drive faster and faster and cut corners, and we've seen so many accidents; people losing their lives," said Barbara Maynard with Teamsters.

The Western Pride Inc. truck involved in Tuesday's deadly accident is based out of Cedar City, Utah. Eyewitness News tried to reach the company for comment.

As investigators talked with the driver and tried to figure out what went wrong, the Teamsters demanded the transportation companies take action before more lives are lost.

"Really it should be the responsibility of these large trucking companies who contract directly with Amazon, Proctor & Gamble, Toyota, Walmart, the owners of this cargo, who really should be following the law and making sure that everybody is safe because these trucks are lethal," said Maynard.
Related topics:
long beachlos angeles countyaccidentfreak accident
Copyright © 2021 KABC-TV. All Rights Reserved.
More Videos
From CNN Newsource affiliates
TOP STORIES