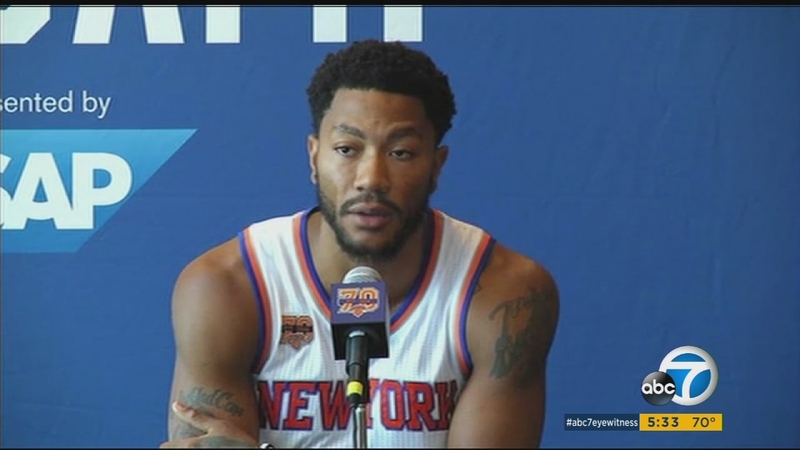 LOS ANGELES (KABC) -- The lawyer for NBA star Derrick Rose said the player was targeted by a former girlfriend who has filed a multimillion-dollar lawsuit claiming she was gang raped by Rose and his two friends.

During opening statements in a downtown Los Angeles courtroom, Rose's lawyer told a federal jury that the sex was "one at a time" and consensual.

The former girlfriend filed a $21 million lawsuit against Rose, claiming that in August 2013 she was drugged and given alcohol at Rose's Beverly Hills home. The suit continues that hours later, Rose and his friends Ryan Allan and Randall Hampton came to the woman's apartment.

During the hearing, federal jury members dabbed their eyes as the woman's lawyer Waukeen McCoy described the assault. He said the woman woke up with a sore vagina, had lubricant all over her body and remembered that Rose retrieved his used condom and took it with him.

In a deposition clip, McCoy asked Rose if he knew what consent was, to which Rose replied with, "no, could you tell me?"

Rose's lawyer, Mark Baute, said there is no evidence that the plaintiff was ever drugged, and he added that she was the one serving the alcohol that night, sending a fully coherent text message. Baute said the text message told Rose, "and I need you to come to me right now."

Baute said in another text message that the woman perfectly spelled out her address, city, state and zip code. He continued that during the sex, the plaintiff did not say no.

He said the woman even continued texting Rose five days later and that she never mentioned the alleged rape.

As for the claim that Rose retrieved the used condom, Baute said NBA players are trained and told the jury that "there are plenty of women who would like to get pregnant with the sperm in that condom."