Donald Trump: 'I will win the Hispanic vote' 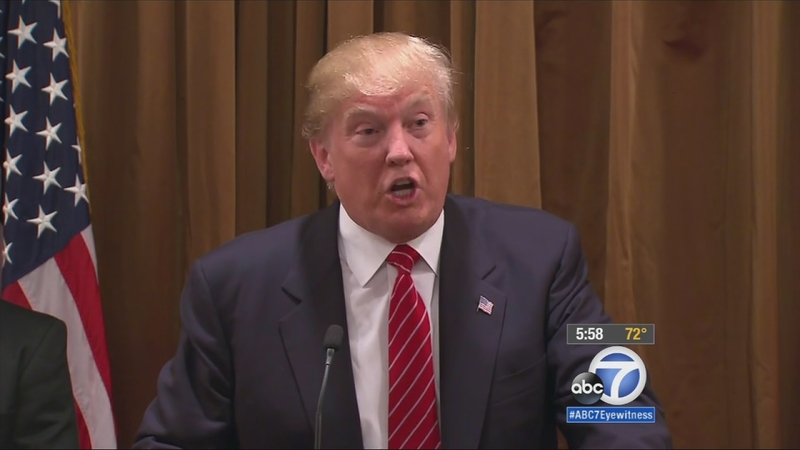 Donald Trump: 'I will win the Hispanic vote'

LOS ANGELES (KABC) -- Donald Trump isn't backing down from his comments about Mexican immigrants bringing crime with them when they enter into the United States illegally.

The Republican presidential hopeful addressed critics at a Friday news conference in Beverly Hills, saying U.S. leaders are not doing enough and letting in illegal immigrants who shoot and kill U.S. citizens.

"We're housing people from all over the world that other countries don't want. They're sending criminals to us and we're putting those criminals in jails, often times after they've hurt somebody or killed somebody," Trump said

He noted that he respects the country of Mexico and pointed to his "great relationships" with Mexican people, including his employees.

"I will win the Hispanic vote. I'm going to get people jobs. Nobody else is going to," Trump said.

Families who lost loved ones at the hands of undocumented immigrants joined Trump at the news conference.

Jamiel Shaw, Sr., whose son was shot to death in 2008 by an undocumented immigrant who had been released from a Los Angeles County jail hours before the murder, agreed with Trump's assessment.

"To me, he (Trump) was being nice, because I would say they're murderers. So what he said was going easy," Shaw, Sr. said.

Meanwhile, about 60 protesters marched outside of Luxe Sunset Boulevard Hotel, where Trump is expected to appear at an event.

"He better stop talking bad about my people, my brothers and sisters, the working community, because we're not criminals," Hawthorne resident Martha Munoz said.

Trump is headed to Arizona over the weekend.