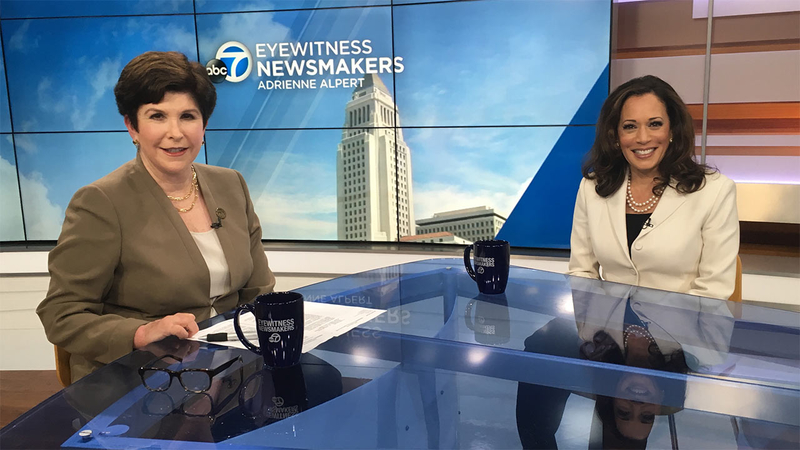 GLENDALE, Calif. (KABC) -- The open U.S. Senate seat, being vacated by outgoing Sen. Barbara Boxer is an unprecedented race. For the first time in state history, two Democrats are pitted against one another on the November general election ballot. Candidate Rep. Loretta Sanchez, 46th District, was a guest on an earlier program.

"I think that California wants in our top elected leaders people who know how to get things done," said California Attorney General Kamala Harris.

The state's top law enforcement officer says her career as a prosecutor has prepared her for the challenges of being a United States senator.

"I have a career of not only being the elected district attorney of San Francisco, but attorney general (of California)," said Harris, "working on issues that range from the foreclosure crisis that impacted so many Californians to work combating transnational criminal organizations, protecting victims of human trafficking, looking at what we need to do to reduce climate change and protect all of our natural resources."

Harris says she has experience on how action and inaction in Washington, D.C., impacts us on local and statewide levels.

"I'd like to go there to fix some of those problems," Harris said.

The career prosecutor acknowledges one of the biggest issues facing the nation this election year is the rash of police shootings and gun violence. Police have themselves become targets of that violence.

"We have to do everything we can to support law enforcement," said Harris, adding that as senator, she would try to get legislation passed cracking down on assault weapons.

"I have seen police officers and babies killed with assault weapons," she said. "I have friends who love to hunt. If you need an assault weapon to go hunting, you need to go back to hunting school."