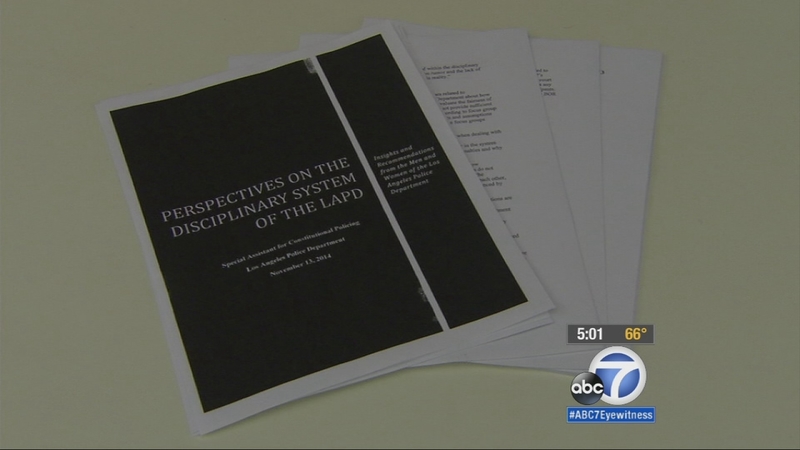 LOS ANGELES (KABC) -- A survey of 500 Los Angeles Police Department employees found widespread concerns among officers and civilians that the department's internal discipline system is flawed and discriminates based on gender, ethnicity and rank.

In a rambling multi-page "manifesto", Dorner outlined his anger and the LAPD for firing him, and accused the department of racism and sexism. The report conducted an investigation to see if any of Dorner's claims were true.

The terror began on Feb. 3, 2013 when Dorner murdered Monica Quan and her fiance, Keith Lawrence. Quan was the daughter of former LAPD Capt. Randal Quan, who was mentioned as a target of Dorner's fury in his so-called "manifesto." Quan had represented Dorner in the disciplinary case that resulted in Dorner's termination from the LAPD.

The current LAPD system was put together by then Lt. William Parker, who went on to become chief. Los Angeles Mayor Eric Garcetti says it needs to be updated.

"We have a discipline system that is 80 years old and has never been modernized," Garcetti said. "I want to see something that's more responsive for our officers that works for accountability," he said.

The report, however, contains data that does not support the perception of bias. Statistics compiled by the LAPD show that the race and ethnicity of officers sent to disciplinary panels for suspensions or termination roughly matches the demographics of the LAPD as a whole.

Garcetti believes some complaints can be handled in a different way that protects both officers and civilians.

"I think a lot of the smaller and lower-level things can be resolved in a non-legalistic environment. That's what we are starting to do in the fire department and I think our police department would benefit from that as well," he said.

The report recommends that there needs to be fairness and consistency in investigations, and to ensure disciplinary decisions are never influenced by bias. The Police Commission will review the report at a meeting next week.