KABC
By Anabel Munoz
LOS ANGELES (KABC) -- A historic landmark in Los Angeles will soon be demolished, but officials want to make sure it receives a proper farewell.

The 6th Street Bridge has connected downtown L.A. to Boyle Heights for 83 years now and stands as an iconic monument.

The bridge has graced the Hollywood big screen in films such as "Grease" and "Transformers."

"Some folks, even if they're not from L.A., recognize this bridge as much as they recognize the Hollywood sign," said Los Angeles Councilman Jose Huizar of the 14th District.

"It's just old Los Angeles. It's an icon and it's such an amazing piece of history and I hate to see it go," artist Jericho Woggon said.

In 2007, experts deemed the beloved bridge too much of a risk because of an alkali-silica reaction that caused it to crack and deteriorate.

In layman's term, the material the bridge is made of is now eating away at the concrete.

Before the bridge is demolished in January of 2016, officials will say goodbye by throwing a farewell party with several performances from artists including Aloe Blacc, War and Graciela Beltran.

The free event will be hosted on Saturday from 2 to 10 p.m. at the bridge and will also have children's games and activities, food trucks and art exhibits.

After the bridge is demolished, a new $423 million bridge, paid mostly through federal and state grants, should be completed by the end of 2018.
Related topics:
downtown laboyle heightslos angelessafetytransportationhistoryconstructioneventsbridgedemolition
Copyright © 2020 KABC-TV. All Rights Reserved.
RELATED 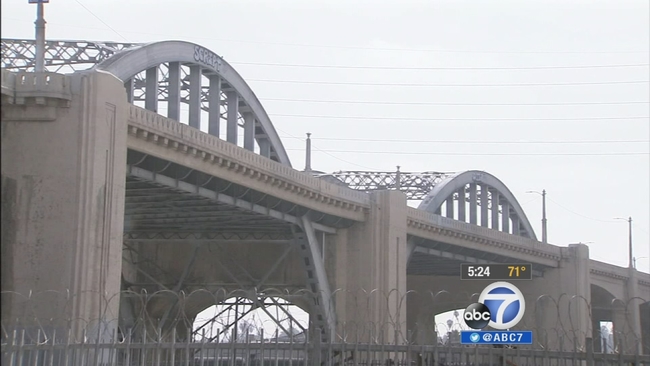