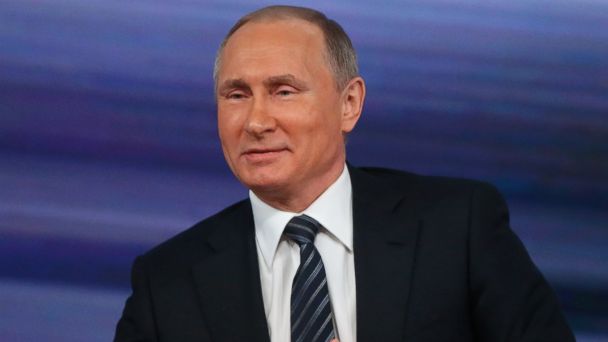 MOSCOW -- Russian President Vladimir Putin surprised health officials across the world today when he announced that his country has invented the world's most effective drug against Ebola.

At a government meeting today, Putin told officials that Russia had registered a new medicine against the deadly illness for which an effective treatment remained elusive, the Russian news agency RIA Novosti reported. The latest outbreak of the highly contagious virus has ravaged West Africa for the past two years.

"We have good news. We have registered a medicine for the Ebola fever, which after the relevant tests, has proven to have a high effectiveness, higher than those drugs which until now have been used in the world," Putin said, referring to the vaccine developed by Russian scientists.

But experts immediately raised doubts about Putin's claims. A scientist who helped develop an Ebola vaccine with very high success rate in clinical trials and which is the only vaccine to have passed the highest stage of testing, called the claims nonsensical. Ira Longini, a professor of infectious diseases at Florida University's Emerging Pathogens Institute, said that the early stage of the Russians' testing of their vaccine meant it was impossible to even discuss how effective it would be.

"This is a preliminary stage 1 study. Which is fine -- it shows their product should go forward. It shows some promise. But you can't say anything about efficacy at this point," Longini told ABC News. Longini said it was "shocking" that Putin had made the comments, calling them "kind of mind-boggling."

Longini was involved in a clinical trial last year of a vaccine developed by the U.S. company Merck. The trial was conducted on behalf of the World Health Organization and in collaboration with a number of international charities, including Doctors Without Borders, as well as the Norwegian and Canadian governments. The trial was conducted on more than 4,000 people in Guinea last year during the Ebola epidemic there, and findings suggest the vaccine has an extremely high success rate, according to a study published in the respected medical journal The Lancet.

The vaccine Longini helped develop is the only Ebola vaccine to have successfully gone through Phase 3 of a clinical trial, when the drug is tested on a large group of people. It is now expected to be licensed and stockpiled by the WHO. The Russian vaccine meanwhile appeared to have only passed through Phase 1 of a clinical trial, where the drug is tested on a small group for preliminary assessment, meaning the Russian vaccine is still two stages off being eligible for legal use by international standards.

"Without the Phase 3 efficacy trial, you can't really make any statements about the efficacy of a vaccine," Longini said. "The best they could say is it's just promising."

Putin did not give details about the Russian vaccine, but in October, Russia's health ministry announced that the vaccine had shown successful results in a Phase 1 trial and had minimal side effects on the 200 volunteers it was tested on. Russian officials have provided few details about the vaccine as it has been developed over the past few month, making it difficult to evaluate it.

Longini recalled attending WHO meetings where the Russian scientists had presented their efforts to develop their vaccine.

"They were always very sketchy. They never provided any data at all. Just concepts. It was just the beginning of their study," Longini said, adding that the Russian efforts had been so preliminary that it was impossible to have even considered including them in the WHO's trial in Guinea.

"Their product was nowhere near ready," Longini said. "They just finished their Phase 1 study now."

Russian officials offered no figures today on how their vaccine compared with Longini's or other vaccines that have had a high rate of success in the countries suffering from Ebola. Russia's health ministry was not immediately available to comment.

Even if the Russian vaccine had passed through the first two stages, it would now impossible for them to reach the same level of testing since the Ebola outbreak is now over, Longini noted. Putin's announcement comes just as the World Health Organization is expected to declare an end to the epidemic in Africa -- it's now 42 days since the last registered Ebola case in Liberia -- well beyond the 21-day incubation period of the virus.

"Even if they got their vaccine through Phase 2, they wouldn't be able to test it. You have to have Ebola transmission happening somewhere to test it," Longini said.

Asked whether he thought the Russian vaccine could now be brought into use against a future Ebola outbreak, Longini replied: "No. That requires proof of efficacy. You could never get that vaccine licensed anywhere. Well, maybe in Russia."