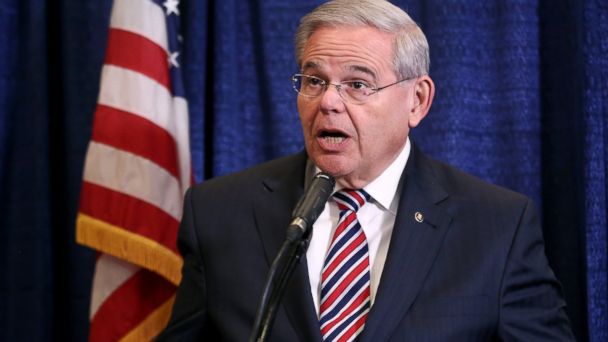 "For nearly three years, I've lived under a Justice Department cloud, and today, I'm outraged that this cloud has not been lifted," Menendez said at a news conference in Newark, New Jersey, Wednesday night. "I am confident at the end of the day I will be vindicated."

"This is not how my career is going to end," Menendez said. "I'm angry and ready to fight because today contradicts my public service career and my entire life."

In a short news conference, Menendez maintained his innocence, saying his actions adhered to the law.

Menendez, D-New Jersey, along with Dr. Salomon Melgen, is charged with one count of conspiracy, one count of violating the travel act, eight counts of bribery and three counts of honest services fraud.

Menendez was also charged with one count of making false statements.

The Department of Justice filed the charges in the District of New Jersey.

The charges center on Menendez's relationship with Melgen, who is a close Menendez ally and donor to the New Jersey senator, in connection with a bribery scheme in which the senator allegedly accepted gifts from Melgen in exchange for using the power of his Senate office to benefit the doctor's financial and personal interests.

The indictment includes allegations Menendez accepted close to $1 million worth of gifts and campaign contributions from Melgen between 2006 and 2013 in exchange for advocating on the behalf of the doctor, saying the senator "used the prestige, authority and influence of his status as a United States Senator to promote Melgen's personal and business interests."

Some of the gifts cited in the indictment include flights on Melgen's private jet, vacations to the Dominican Republic, and $40,000 in contributions to his legal defense fund. Melgen also donated over $750,000 in campaign contributions. Menendez did not report the gifts Melgen provided on any financial disclosure forms.

The indictment also alleges the New Jersey senator used his position and his staff to advocate for Melgen's interests, including stepping in in a legal dispute involving approximately $8.9 million of Medicare overbilling by Melgen and supporting visa applications for Melgen's girlfriends.

Last month, the New Jersey Democrat denied any wrongdoing as the Department of Justice weighed issuing criminal charges against him.

"Let me be very clear, very clear. I have always conducted myself appropriately and in accordance with the law," Menendez said.

Menendez is the ranking Democrat on the Senate Foreign Relations Committee and has been at the forefront of many of the Senate's recent foreign policy fights. Menendez, who is of Cuban descent, is a fierce opponent of President Obama's decision to normalize relations with Cuba. The New Jersey senator is also leading efforts to impose new sanctions on Iran if nuclear negotiators fail reach to deal - a move that has put him at odds with the White House.

Menendez plans on temporarily stepping down as ranking member of the Senate Foreign Relations Committee, a source with knowledge of the decision told ABC News.

Menendez is the 12th senator to be indicted while still serving in the Senate.

The last senator to be indicted was Sen. Ted Stevens, R-Alaska, who faced criminal charges due to not reporting hundreds of thousands of dollars in services he received during the renovation of his home. Stevens was convicted in 2008 but in 2009, a federal judge dismissed the conviction.