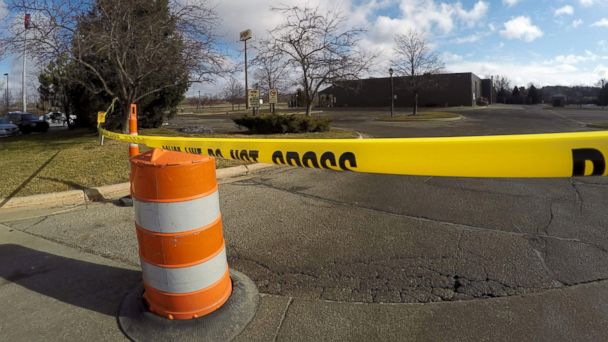 A 14-year-old girl wounded in a deadly shooting spree in Michigan this weekend was initially pronounced brain dead at the hospital before she squeezed her mother's hand and was rushed to surgery, her family told authorities.

She is now in critical condition and "fighting for her life," her family said.

Her family told the lieutenant that an hour or two later, the hospital was in the process of preparing her organs for donation when the girl squeezed her mother's hand, he said.

The hospital then immediately started prepping the 14-year-old for surgery, the lieutenant said.

The girl is in critical condition today, her family said in a statement, saying, "Our daughter's prognosis is uncertain as she continues fighting for her life."

The shooting spree began when a woman was shot multiple times in the parking lot of a townhomes complex around 5:45 p.m. Saturday, Michigan State Police said. The woman survived and her condition was not immediately released.

Then a father and son were shot and killed around 10 p.m. Saturday at the Seelye Ford KIA Dealership in Kalamazoo, state police said. The victims were identified as Richard Eugene Smith, 53, and Tyler Daniel Smith, 17, of Kalamazoo, Kalamazoo Public Safety said.

The 14-year-old is the sole survivor of the Cracker Barrel shooting.

Mary Jo Nye, one of the women killed in the Cracker Barrel lot, was a retired teacher, The Associated Press reported. Her former co-worker Tara Egnatuk told ABC News that Nye "was a wonderful person and mentor."

"I am getting messages from former students who are heartbroken today sharing all sorts of great memories," Egnatuk said.

The alleged gunman had brief conversations with his victims before shooting them at point blank range, but there was no indication he knew any of them, and no apparent connection between the three different groups of victims, officials said.

"There's no common denominator with any of these," Kalamazoo County Undersheriff Paul Matyas said. "This person was just waiting in the parking lot of the apartment complex. The one at ... the dealership, they were looking at cars. The ones at Cracker Barrel, they were just sitting in their cars. There is absolutely no common denominator ... through race, age, anything.

"This is every community's nightmare -- when you have someone going around just randomly killing people, no rhyme, no reason," Kalamazoo County prosecuting attorney Jeff Getting said.