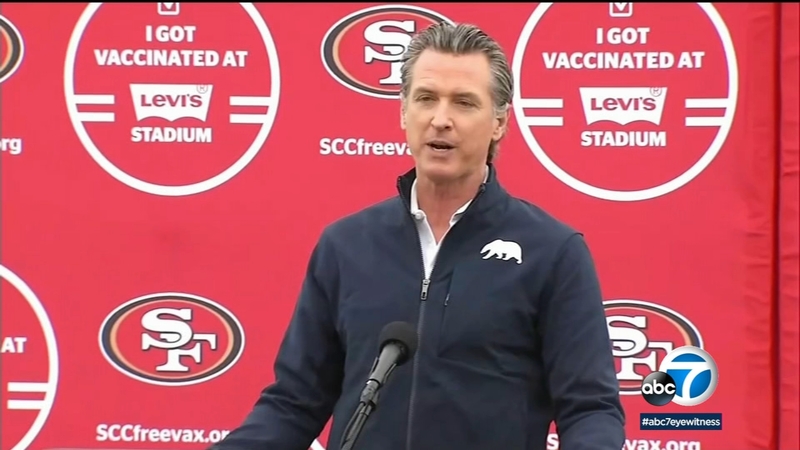 SACRAMENTO, Calif. (KABC) -- President Biden is on the record as being against the burgeoning effort to recall Gov. Gavin Newsom.

"In addition to sharing a commitment to a range of issues with @GavinNewsom from addressing the climate crisis to getting the pandemic under control, @POTUS clearly opposes any effort to recall @GavinNewsom," the White House press secretary, Jen Psaki, tweeted on Tuesday.

In order for the recall election to happen, organizers need to collect 1.5 million petition signatures by mid-March. They appear to be close.

So far, two Republicans have announced plans to run: former San Diego Mayor Kevin Faulconer, and John Cox, who lost to Newsom in the last election.

A recall in the nation's most populous state would become a marquee contest with national implications, watched closely as a barometer of the public mood heading toward the 2022 elections, when a closely divided Congress again will be in play.

The governor said the state would begin flipping some of its COVID-19 testing sites into vaccine distribution sites.

California voters weary of restrictions that have cut them off from jobs, classrooms and friends, combined with anxiety from the continuing threat of the coronavirus, could create a volatile mix at the ballot box. Newsom also has weathered a public drubbing for dining out with friends and lobbyists at a San Francisco Bay Area restaurant last fall, while telling residents to stay home.

More recently, an ever-expanding fraud scandal at the state unemployment agency has his leadership during the pandemic under even closer scrutiny.

"When you have a very angry, frustrated electorate, they are being driven by emotion, not facts," said pollster Ben Tulchin, who worked for former Democratic Gov. Gray Davis when he was ousted in a 2003 recall election and replaced by Republican Arnold Schwarzenegger.

Former President Donald "Trump got elected because voters were angry," Tulchin said. "Gavin (Newsom) needs to take this extremely seriously. There are enough people who are undecided, who are up for grabs. Voters are split on him."

In addition to sharing a commitment to a range of issues with @GavinNewsom from addressing the climate crisis to getting the pandemic under control, @POTUS clearly opposes any effort to recall @GavinNewsom

The election would occur at a time when the country is being shaken by political turmoil in the post-Trump era, and Newsom is losing ground with key voter groups. Independents now make up about 1 in 4 registrations in the state, a number roughly equal to Republicans. Young people, in particular, lean progressive but are less likely than their parents to adhere to traditional party loyalties.