The video shows the principal talking to the students who apparently showed up for the second day in a row refusing to wear masks.
KABC
By Rob McMillan 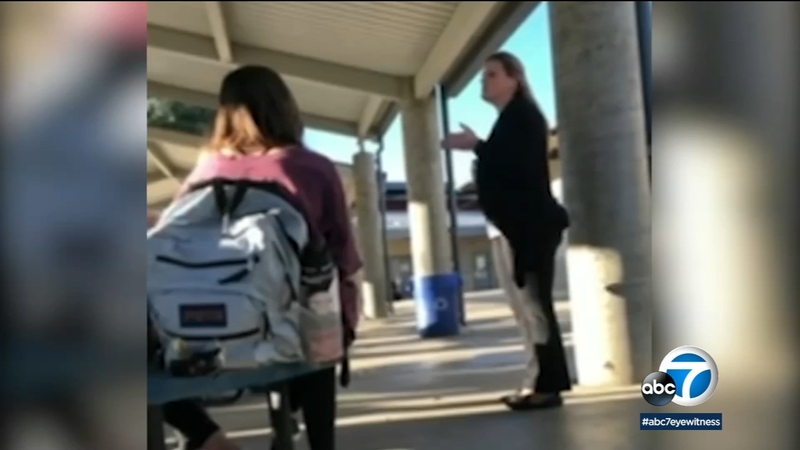 NORCO, Calif. (KABC) -- More than 100 parents protested mask mandates outside Norco Intermediate School in Norco Tuesday morning after a video began circulating on social media showing a principal telling students they would be marked truant if they continue to refuse to comply with the state mask mandate.

The video showed a group of students being spoken to by the principal in an outdoor area of the campus after the students apparently showed up at school for the second day in a row refusing to wear masks.

"She spent all day outside berating the children, browbeating them, misinformation, and fearmongering all of our children," said parent Nicole Brillhart, who said it was her son who shot the video of the principal's interactions with students. "We're done asking, we're telling, our children are not wearing masks anymore."

After school, other parents voiced their support for the students' decision not to wear masks.

"Listen to the kids," said grandparent Roger Vankirk. "Sometimes, they have a lot to say, and then let the parents decide. It should be the parents' decision. That's the only way I see it."

However, others disagree, saying the mask mandate for students should remain in place.

"They don't understand what the mask stands for," said grandparent Paul Silva. "A lot of these kids are protesting because of the parents telling the public to do that , because they don't want to wear a mask or whatever, and they think they're invincible. Check out the hospitals and how many people have already passed away."

"On Monday morning, the District became aware of a video which has been widely shared online of one of our site principals discussing in an outdoor setting the current mask mandates to students participating in a mask-out protest at Norco Intermediate School," read the statement. "Administration and human resources have addressed the situation with the site Principal. Due to confidentiality restrictions, we are unable to provide additional details regarding staffing matters."

According to the statement, the anti-mask protests this week were a continuation of an organized protest which occurred on campus last Friday. About 200 students from across the district participated in the organized protest.

"Due to current California Department of Public Health rules, the District is unable to allow students indoors without a mask. The District has taken steps to safely allow the students to express their objection to the mask rule by providing a place and manner for students to demonstrate. Students were supervised outdoors and given the opportunity to complete work. While we celebrate our students' initiative in expressing their freedom of speech, that freedom does not extend to boycotting classes or disrupting instructional time, as we have a responsibility to ensure that we maintain an orderly environment for learning."