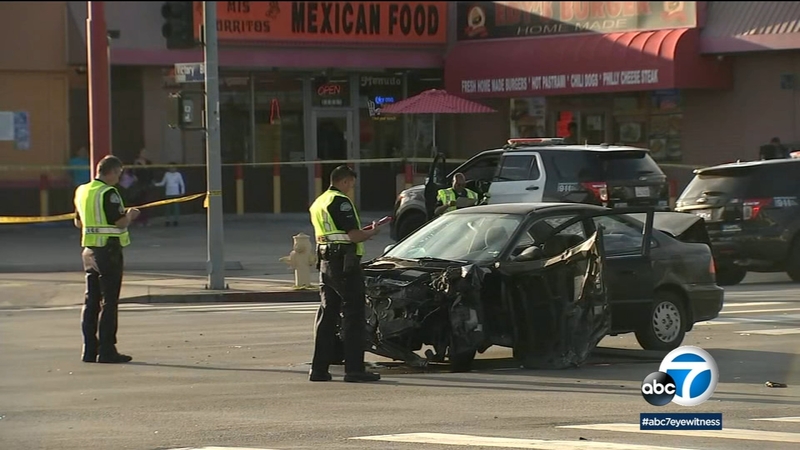 NORTH HOLLYWOOD, LOS ANGELES (KABC) -- A woman died after being hit by a driver detained for possible DUI in a triple-car crash in North Hollywood Tuesday afternoon.

The collision occurred near the intersection of Vineland Avenue and Victory Boulevard at approximately 3 p.m.

The suspect detained was behind the wheel of a BMW. Police believe the driver was speeding through the intersection, ran a red light and collided with a Honda Civic that was waiting to turn.

The impact propelled the BMW into the parking lot of a CVS Pharmacy, hit a parked car and bounced back onto the sidewalk, where the car landed on top of the woman standing near a bus stop, officials said.

"I really don't have the words. My condolences to the family," said Mercedes Medina, who lives near where the crash happened. "Nobody can ever bring that person back for a drink that could have waited till the night or when they were home."

Los Angeles police said some people in the area lifted the car off the pedestrian, who was transported to a hospital and died.

The suspect suffered non-life threatening injuries and was also transported to a hospital.

The driver in the Honda was also transported.