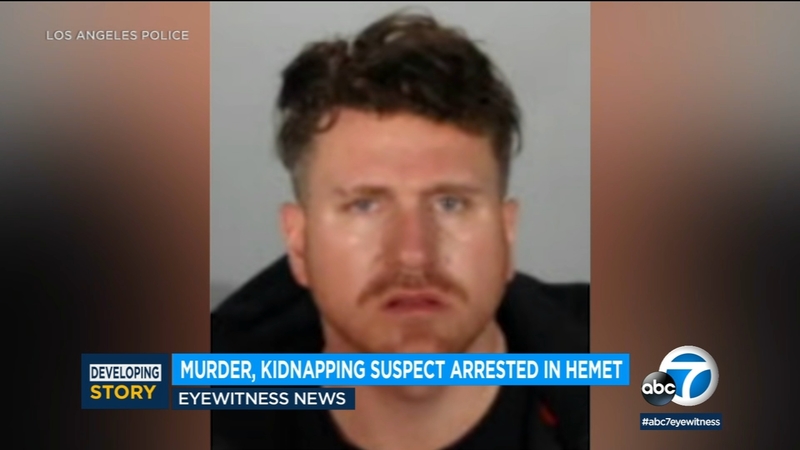 Man arrested in fatal shooting of bystander in North Hollywood

HEMET, Calif. (KABC) -- A man who had been sought in the kidnapping of his ex-girlfriend and the fatal shooting of an innocent bystander in North Hollywood was arrested Tuesday afternoon in Hemet. The kidnapping victim was found "battered and bruised but alive," authorities announced.

LAPD personnel responded to interview Rayment and escort the victim, Jenny Downes, back home. Her injuries were not life-threatening and she "agreed to seek medical attention on her own should the need arise at a future date," police said.

A second man, a resident of Perris, was also in the vehicle during the traffic stop, according to the LAPD. Investigators determined he "had no involvement in the murder-kidnapping" and he was released from custody.

The fatal shooting occurred at 2:26 p.m. Sunday in the 11300 block of Hatteras Street, according to Los Angeles police.

Authorities said the man who was fatally shot had tried to intervene in an argument between Rayment and Downes. That victim, later identified as Roberto Fletes, 42, of North Hollywood, died after being transported to a hospital.

Police said the incident began when Downes and Rayment were in an argument near Hatteras Street and Tujunga Avenue.

Investigators said Fletes tried to intervene and was shot by Rayment, who then forced his ex-girlfriend into a truck and fled the scene.

After being arrested, Rayment was booked at the Larry D. Smith Correctional Facility in Banning on a felony warrant for murder, the LAPD said. His bail was set at $3 million and he is scheduled to be arraigned Friday in Riverside County Superior Court.