Chasing Waterfalls: See 5 of California's best waterfalls all in a single day 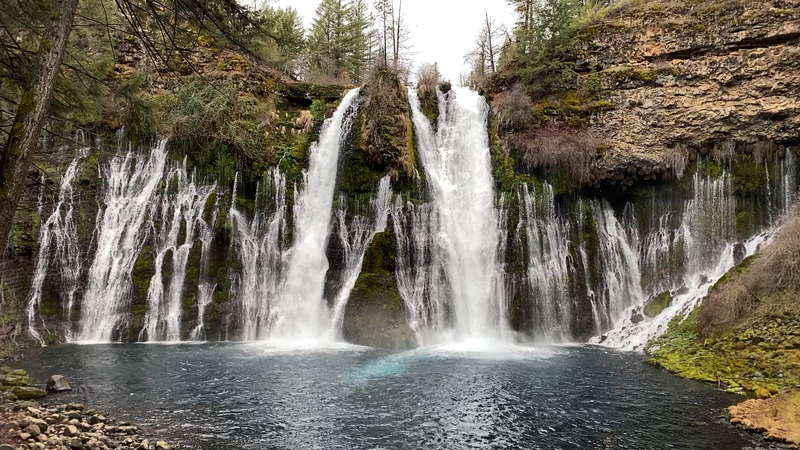 How to see 5 CA waterfalls in 1 day

SHASTA CASCADE, Calif. -- One of the silver linings of the past year has been the opportunity to explore California's natural beauty (in between lockdowns, of course).

In March of 2021, I came across an article on Northern California's most impressive waterfalls written by Miles Howard for National Geographic. In the piece, he makes a strong case for visiting the "waterfall mecca" known as the Shasta Cascade region. Howard suggests one easy way to see five of the best waterfalls in California -- all in a single day.

Always down for a mini-vacation, an adventure, and an excuse to get out of my (home) office, I jumped at the chance. I think you should, too. But let's just say things didn't go as planned for me. So learn from my mistakes and keep reading for tips on seeing Hedge Creek Falls, McCloud Falls (three waterfalls for the price of one!), and Burney Falls.

Start Smart
This tip actually comes straight from Miles Howard, the waterfall enthusiast who penned the NatGeo article. I spoke with him before heading out on my adventure, and he suggested staying in Redding as a home base to cut down on drive time on your big day.

Also, check the weather before you head out. (More on how I learned that lesson the hard way in the video at the top of this story.)

Stop No. 1: Hedge Creek Falls
Hedge Creek is the amuse-bouche for what's about to be an all-out waterfall feast. Just off I-5, it's easy to get to from Redding, and would even make for a good pit stop if you're just trying to stretch your legs on a long road trip to or from Oregon.

I had no trouble finding parking at the trailhead, but that might be different for those not visiting on a snowy Monday in March. From there, it's a five-minute walk downhill to the base of the waterfall.

This waterfall is delicate, compared to some of its friends you'll be visiting later, but it's special because you're able to get up close to it. You can walk into the cave behind the waterfall as long as you're OK getting a little misty. I don't generally advise doing this loop in the snow, but it did make for some beautiful conditions at Hedge Creek.

McCloud Falls is where the waterfall count starts to climb quickly. You can see Lower, Middle and Upper Falls by driving to different lookout points, or you can hike a four-mile loop along the McCloud River Falls Trail to catch them all.

This was my plan -- until I arrived. Turning off Highway 89 and into the park's entrance, it only took a few hundred feet for the road to disappear. At a much higher elevation than my last stop, it looked like snow had been dumped all around me and no one had been tasked with clearing the roads. I didn't read the fine print on the Forest Service's website warning me this might be the case through early April. (In my defense, it's quite far down the page!)

So I did what I can only advise you not to do: I tried it on foot.

I pulled over on the last patch of snow-free road I could find, then set out to walk about half a mile to Lower Falls. I was not wearing hiking boots, let alone waterproof hiking boots, because as it should be abundantly clear by now: I was underprepared.

But I was on a mission. So I trudged through the snow (about a foot deep, I should add) to my destination. Waterfall no. 2 was in the books.

From here, you'd have the option of hiking along a trail to Middle Falls, but that seemed totally out of the realm of possibility for me. If the roads weren't groomed, you can bet the trail wasn't either. And I wasn't trying to get lost in the woods or lose a toe to frostbite for this story.

After walking back to the car, and parking just a smidge closer, it was still a mile away to Middle Falls. In true "do not try this at home" fashion, I wrung out my socks and started trekking.

And I made it.

But even I wasn't crazy enough to keep going. According to my trusty friend Google Maps, it would have been an hour and 19 minute walk to Upper Falls. Me and my wet socks weren't ready for that kind of commitment.

Thus, McCloud Falls left me wanting more. I'll be back when the snow melts to close the loop.

A real silver lining of this misadventure was I got to see the McCloud Falls with not another soul in sight. How many people can say they did that? I'm just glad I didn't lose a toe.

The last stop: Burney Falls
Visiting Burney was the definition of saving the best for last. The drive from McCloud to Burney was just under an hour (perfect amount of time for my feet to defrost). It's also lower in elevation, so there was hardly any snow on the ground when I arrived. The parking lot was easy to access from the road, but heads up: it's a $10 fee to park there.

Once you park, you'll immediately hear the roar of the falls. Just a third of a mile later, you'll be at the base of the waterfall. Try not to let your jaw drop. I dare you.

Burney Falls first strikes you as a massive, imposing wall of water. The kind of natural wonder that makes you feel small and insignificant in the best way possible. Once you look closer, you'll see all these tiny rivulets leaking out from behind the rocks. They make it look like the rock face is swelling with water, and might explode any minute. Now you're a little scared, in the best way possible.

Of all five four waterfalls I saw on my ill-advised Northern California road trip, Burney Falls was my hands down favorite. It also happened to be the easiest to see in a snowstorm. Coincidence? I think not.