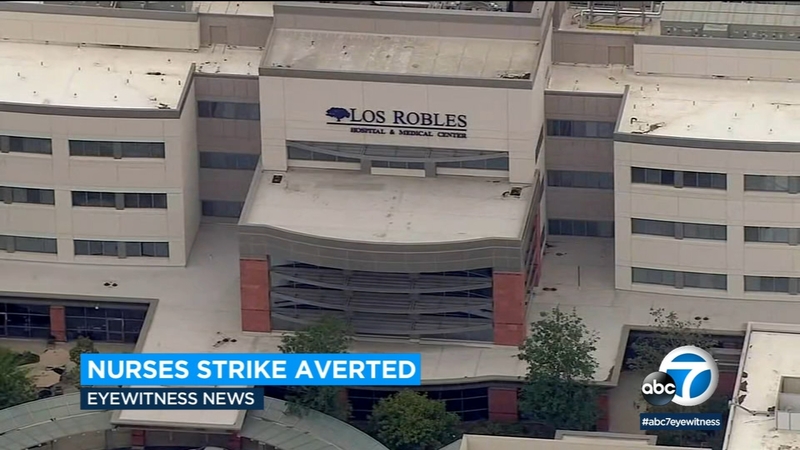 RIVERSIDE, Calif. (KABC) -- A planned strike by nurses at three Southern California hospitals has been averted after a new deal with reached with the union, hospital officials announced Saturday.

Nurses at Riverside Community Hospital, West Hills Hospital and Medical Center and Los Robles Health System had authorized a 10-day strike starting Christmas Eve, over allegations of unfair labor practices and a failure to protect staff during the coronavirus pandemic.

Now the union, SEIU 121RN, has agreed to a new contract, according to a spokesperson for Healthcare Corp. of America, Far West Division, which operates the three facilities.

"This is a positive development for our colleagues, patients, fellow medical providers and the communities we serve," the company said. "We appreciate community leaders who put the needs of the communities first over the past week and expressed concern regarding the planned strikes."

The union confirmed the tentative deal had been reached, but noted it still has to be voted on by the full membership, expected on Dec. 22 and 23.

The union said the two sides spent more than 100 hours in negotiations since Dec. 11.

"We were able to get some strong pandemic safety guarantees in our union contract - we may be one of the first healthcare unions in the country to get such strong language in our contract," said Kerry Cavazos, a nurse at Riverside, and chapter president of the union at the hospital. "Nurses and licensed professionals were willing to strike for this - even during a pandemic - to make sure our hospitals are better prepared for public health crises."

The timing of the planned strike had sparked concerns by doctors and hospital administrators who are struggling with an influx of patients during the COVID-19 surge. Many hospitals throughout Southern California report being at or near their maximum capacity, particularly in their intensive care units.

A group of doctors who practice at those three hospitals, and who normally do not intervene in labor disputes, took the unusual step of sending out a note urging the nurses to reconsider the timing of the strike.

"It is unusual, but it shows the point that this is an unusual time," said Dr. Steven Kim at Riverside Community Hospital. "It's a critical time, and we felt so strongly that without our nursing partners, patients' lives would be at risk undoubtedly."

The union had authorized a strike after expressing concerns that staffing levels were inadequate and insufficient measures were taken to protect nurses during the coronavirus pandemic. They said there was a shortage of protective equipment, insufficient testing and instances of patients who were not previously infected contracting COVID-19 while at the hospital.

Last week, the nurses union said two staff members at Riverside had died "and scores there have fallen ill, spreading the disease to co-workers and possibly otherwise-uninfected patients."

HCA said the hospitals had been working to protect the health of patients and staff. The company's statement Saturday said: "Throughout the bargaining process, our hospitals continued to put the health and well-being of our colleagues and patients first, and we will continue to do so as we collectively battle the pandemic which is bringing so much pain to our communities."

With many intensive care units already at maximum capacity in the Inland Empire, doctors are warning that an increase in cases after Christmas and New Year's could be catastrophic.