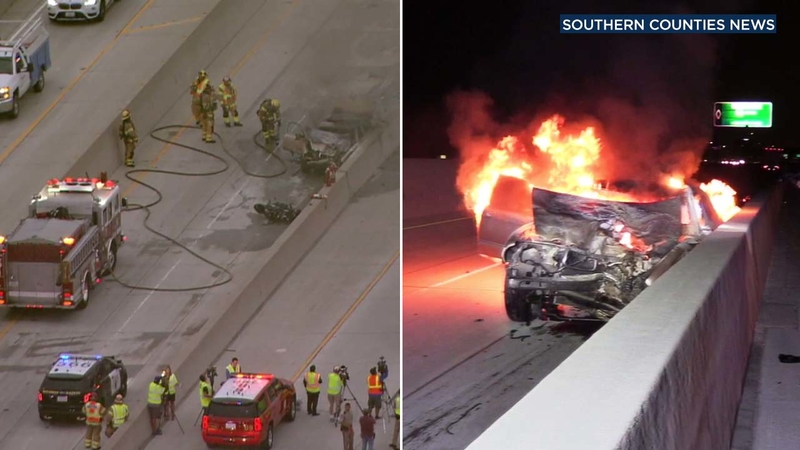 2 killed in fiery, wrong-way crash on 5 Fwy in OC

SANTA ANA, Calif. (KABC) -- Two people were killed in a fiery, wrong-way crash involving a car and a motorcycle on the 5 Freeway in Santa Ana, shutting down all northbound lanes for hours early Thursday morning.

A Jaguar sedan was traveling southbound on the northbound carpool lane and slammed into a motorcycle head-on, the California Highway Patrol said. Both the car and motorcycle burst into flames.

"It's one of the worst ones in a while. When I got to the scene, it was pretty bad," said Officer Florentino Olivera.

The crash occurred shortly before 4 a.m. on the northbound 5 Freeway just south of the 22 and 57 interchange, near the border of Orange and Santa Ana.

CHP officers are not sure why the driver was heading in the wrong direction. They aren't sure if it was confusion or if what happened was intentional.

All northbound lanes were shut down for hours and traffic was backed up for miles. Several lanes were reopened around 6:30 a.m. The identities of the deceased were not immediately disclosed.

The entire northbound side of the 5 Freeway in Santa Ana was shut down due to a fatal wrong-way crash on Thursday, June 28, 2018.