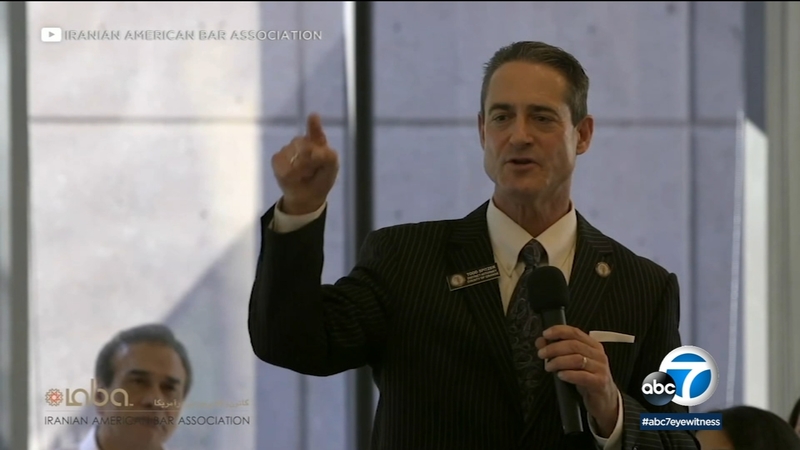 ORANGE COUNTY, Calif. (KABC) -- One day after several groups called for the resignation of Orange County District Attorney Todd Spitzer for allegedly making racist remarks while discussing a murder case last year, he now finds himself at the center of more controversy.

A video of Spitzer surfaced on Wednesday in which he heard using the N-word multiple times. The video was taken in 2019 during an event with the Iranian American Bar Association. Spitzer was speaking about hate crimes and was quoting statements that were projected on a screen as part of his presentation.

According to a memo obtained by Eyewitness News last week, the comments were made during a meeting regarding the case of Jamon Buggs. Buggs was charged with murdering two people over an ex-girlfriend, who is white.

The memo, which was written by former Senior Assistant District Attorney Brahim Baytieh in Dec. 2021, stated the purpose of the meeting was for senior prosecutors to recommend appropriate punishment for Buggs, who is Black. The recommendations were either life without the possibility of parole or the death penalty.

According to the memo, Spitzer asked about the race of the defendant's prior female girlfriends and or victims. He allegedly said, "He knows many Black people who get themselves out of their bad circumstances and bad situations by only dating white women."

"Obviously, the stories that are coming out are troubling and need to be investigated," said Jodi Balma, a political science professor at Fullerton College.

Spitzer is currently running for re-election, and Balma said his campaign could be affected by what happens next.

"If it is a flashpoint and everything comes out in the next week, and there's nothing more between now and May when the ballots drop, I think it's not going to be a transformational story," said Balma.

Orange County Deputy District Attorneys have asked to meet with Spitzer to discuss the allegations.

Eyewitness News obtained the questions that were asked, which include inquiries about the alleged racial remark in Buggs' case and another regarding office morale.

Spitzer issued a statement this week saying, "I am not perfect, but an inartful comment during an hours-long debate in a double murder case is not reflective of my core beliefs or the years I have spent fighting to make our society more equitable and our communities safe for everyone."

Eyewitness News asked for comment regarding Wednesday's internal meetings, but no one from the Association of Orange Deputy District Attorneys would comment.