Orange County District Attorney Todd Spitzer says setting bail at zero for inmates will place 'the worst of the worst' back in neighborhoods.
KABC 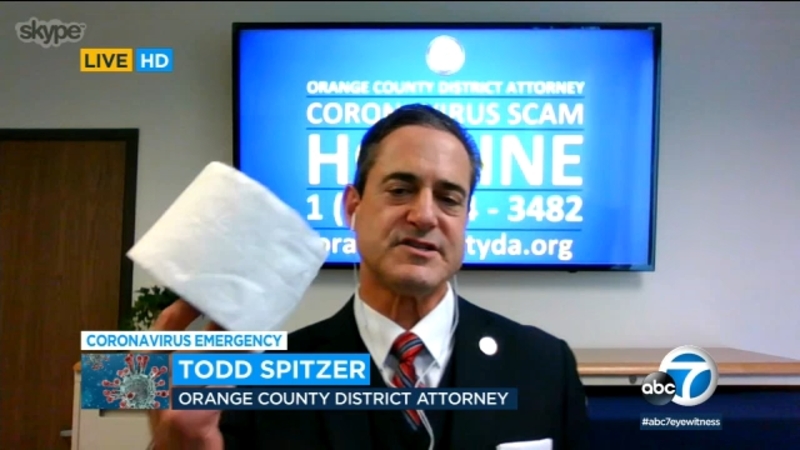 There have been reports of people taking advantage of others in this very challenging time by, for example, charging exorbitant amounts to buy essential items.

What is your office doing about price gouging?

"Just like other prosecutors across Southern California we are actively engaged in trying to shut down scams. In fact, if you look behind me you'll see a phone number, (714)834-3482, and you can call our hotline, you can also go to orangecountyda.org. I mean just think about the things we're dealing with today - commodities. Here's a mask that's typically a dollar. And then today on the internet they're going for about $5. Here's a simple roll of toilet paper that we've all taken for granted - but not today. And now people are charging $5. So, what we're doing as prosecutors throughout Orange County in Southern California is sending out a very strong message. That if you raise your prices to take advantage of this pandemic and your price exceeds 10% of what the price was before the crisis - we can prosecute you."

With the courts at minimal staffing, how are you handling important cases like elder and child abuse?

"What's really sad is elder abuse reporting is down 62%, child abuse is down 40%. It's because I really think that the mandatory reporters, being bank people, school teachers, people that see the elderly, let's say in a financial institution or kids at school - they're not interacting with these vulnerable populations. So reporting is way down. My prosecutors are all over this, looking for abuse. But I want you to know as a member of the community, if you see a child or elderly person and they don't look right - I want you to call us. It's better to err on the side of caution by using this number that we posted. Please call us and let us know. We want to protect the public. That is our mandate, that's our duty and that's our moral responsibility."

What about defendants who are having their bail reduced to zero?

You know, that's one of the most scary things. Look, I commend the courts because they try to act quickly. A lot of us, the courts didn't have the technology to make appearances so they're used to doing things the old-fashioned way of being in the court. But we're dealing with very, very dangerous individuals. We all know our jails are overcrowded. State prisons aren't even taking inmates from counties. They don't want loops of in-and-out of state prisons. So we're housing a lot of people who are very, very dangerous all over Southern California in jails.

Our sheriff Don Barnes, he's doing a great job, he's reduced his jail population by a third. Alex Villanueva, the sheriff of Los Angeles, he's made decisions to release inmates that needed to be released early. Now, we're dealing with the worst of the worst. And they have to be kept in jail. So just today I had a child molester who tried to get out because he has asthma, who in 2006 during his jury trial, he fled to his home country of England. We expedited him, we brought him back to Orange County. And now, he wants to get out. What do you think's going to happen if he gets out? You'll never find him again. These are common stories that we need to avoid and the public has to know. We're in the courts every day - personal appearances fighting against the releases."
Report a correction or typo
Related topics:
societyorange countyinmatesbailoutcoronavirusjail
Copyright © 2021 KABC-TV. All Rights Reserved.
CORONAVIRUS 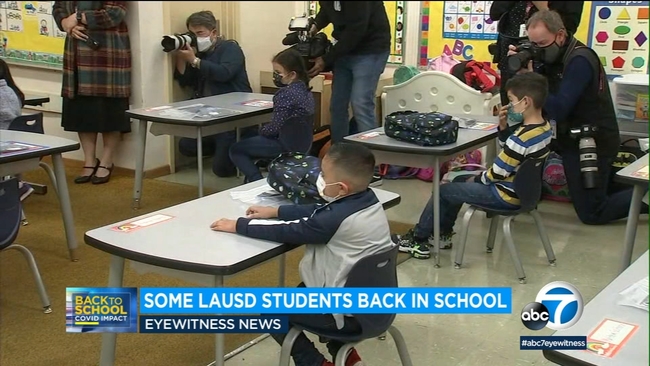