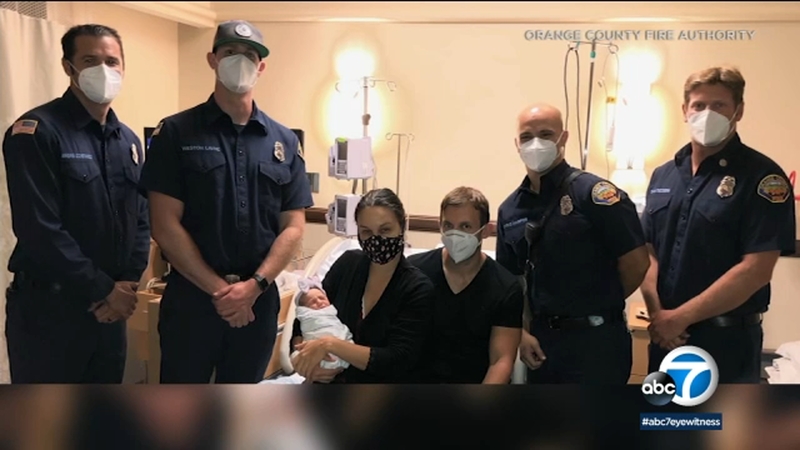 LAKE FOREST, Calif. (KABC) -- A celebratory reunion Wednesday, brought together first responders and the military family they helped when their baby arrived early in a hotel room.

It all happened at the Towneplace Suites.

The original arrangement involved a doula and hospital.

The military family is stationed in Sicily, but wanting to deliver her baby close to relatives, Amanda Thomas came home to Orange County.

Dad, Matthew Thomas, is an audiologist with the Navy. He was glad to join his wife just three days before the birth after missing the arrival of their firstborn while deployed.

MIRACLE BABY: Hear from Esbeidy about her battle with coronavirus while she was pregnant, and how she's lucky she and her baby girl are alive.

"I didn't meet him 'til he was 3 months old, which was kind of upsetting," Matthew Thomas said.

After mom's water broke in the hotel room, the plan was out the door.

Dad was on traffic control.

"Had 911 on one phone. I had her doula on the other phone. It was a landline so I had to undo the wire to get it close enough to do what they were telling me to do, and she was not happy with what I was trying to make her do," Matthew Thomas said.

WATCH: "I just had to turn it over to God, and I guess he wouldn't give me quadruplets if he didn't want me to be around for them," the mother said after recovering from her brain surgery.

"Pulling my hair back and holding my hand and telling me, 'You're doing great,"' Amanda Thomas recalled.

"I'm talking to the husband getting all the info. We're just waiting for the firefighters to show up to take control of the baby," Pequeno said.

The Orange County Fire Authority crew wasn't quite in the room.

"When she said the baby is coming, I looked at my partner and I'm like, 'Okay, I guess we're gonna deliver this," Debolt said.

Firefighter Chris Harper remembered hearing the yelling when his crew was about 15 feet from the room.

"We were actually in the hallway and we heard somebody yell, 'It's coming,"' Harper said.

The first-time parents say the family has been 10 years in the making.

This was a first for firefighter Harper, but he had just refreshed his training on emergency births about a month ago.

Harper said he "felt very fortunate to be there and lucky to be a part of it."

Mom remembered realizing, "there was a lot of people in the room, so many people."

Just before 10:00 p.m. on the night of Sept. 30, Elara Thomas came into the world, making Colton Thomas a new, proud big brother.

"We're just so blessed and so lucky and so full of gratitude to all these folks for coming and helping us," Amanda Thomas said.