KKK flyers show up outside dozens of Newport Beach homes 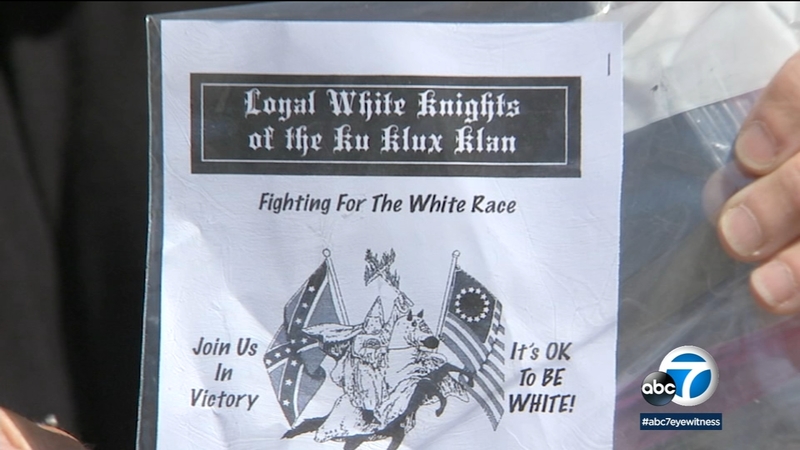 Devin George came to Southern California more than two years ago to escape what he calls more prevalent racism in his hometown.

"I moved from the South, specifically for those reasons because you just experience a lot of things like that, and I don't want to experience it here," George said.

Unfortunately, the Orange County community where the fitness professional works and lives was shocked after waking up to the racist flyers Sunday morning.

Olivia Slutzky's husband found one outside their Newport Heights home and she planned to have a talk about it at the dinner table with her children and husband.

"I'm surprised my husband actually threw it away. I think it would be a worthy conversation to have at the table and to discuss how this could happen and what their reaction is to it," Slutzky said.

This wasn't the first time the Slutzkys addressed messages of white supremacy in their Newport Beach home.

Just a couple years earlier, there was a serious talk in their Jewish household about a photo taken at a local high school party. It showed red plastic cups arranged in the shape of a swastika and students giving what appeared to be a Nazi salute.

A photo taken at a teen party in Newport Beach that showed cups arranged to form a swastika is sparking outrage in the community.

"To think that there are people in our neighborhood that are not only maybe even secretly in support of it, but obviously openly supporting a group like this is hard for me to reconcile as an American and a human," Slutzky said.

Though it was alarming, George said word of these flyers didn't change life in America much for a Black man like him.

"Even before this I had to watch how I move, so this is no different, and it's sad that I have to be that way in the community that I live in and this country in general, but it may change," George said. "It may never change and it is what it is. I just have to be prepared."

One man in the Newport Heights community where the flyers were found told Eyewitness News he didn't see a problem with them.

From what people in the affected communities told Eyewitness News, it sounded like dozens of homes received the flyers.

A spokesperson with the Newport Beach Police Department said Monday an investigation was underway, but provided no additional details.