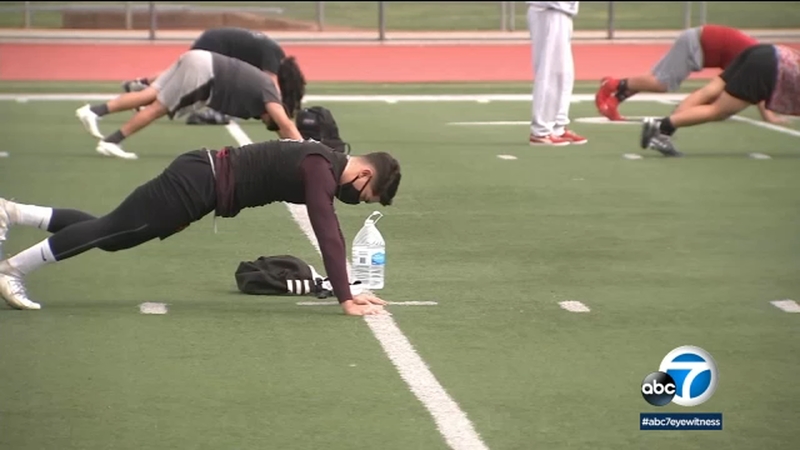 Saints coach Charlie TeGantvoort said athletes are required to separate into pods, wear masks, disinfect equipment between drills and keep everything they bring with them.

"These kids were lined up an hour early, you know, because they're excited because they want to be back," TeGantvoort

With Santa Ana seeing the most COVID-19 cases in Orange County, Coach "T" said safely getting back to training was even more critical.

"Just because the depression and because when you have so much negativity, things hitting your family, loss of jobs, loss of life, you need somebody that you care about that cares about you to lean on a little bit and what better than a teammate and a coach," TeGantvoort said.

Experts from the CDC say that with the right mitigation measures, there is a path to low-risk, in-person learning.

"You don't want to go out and then get exposed and then take it back to your parents or grandparents or whoever you live with. So it's like tough but it's also good for us for our health, our mental, it's what we love to do," Vega said.

"Pretty amazing, it was just like nice to be back out there with another team, have a racing environment, a little bit of adrenaline," Richards said.

As students spend more and more time with their tech gadgets, parents have a growing concern about digital dependency.

The California Interscholastic Federation has several seasons going from January through April because of COVID-19. Cross country, skiing and snowboarding are allowed within the purple tier. That's where O.C. landed after the state lifted a regional stay at home order at the end of January.

ANHS Girl's Cross Country Head Coach Stacy Middlebrook said things looked different over the weekend. Only people living within the same household were allowed to cheer on students. A couple schools faced off instead of hundreds.

"All the teams are struggling with their numbers because with kids dropping out not knowing when the season is gonna be, but we're hoping for this to be a pretty sizable meet," Middlebrook said of their upcoming meet against Tesoro High School.

As the Wolverines prepared for next weekend's race, Saints wide receiver and defensive back Isaac Lariva said they would keep training with one hope: "To have a season."

According to SAUSD Public Information Officer Fermin Leal, as long as O.C. continues in the purple tier, school district officials are planning to allow conditioning for all sports as long as state guidelines are followed and training is outdoors.

Actress Goldie Hawn, director Ava DuVernay and NBA star Kevin Love are helping promote a California coalition that is aiming to tackle youth depression and suicide rates that have been magnified by the pandemic.