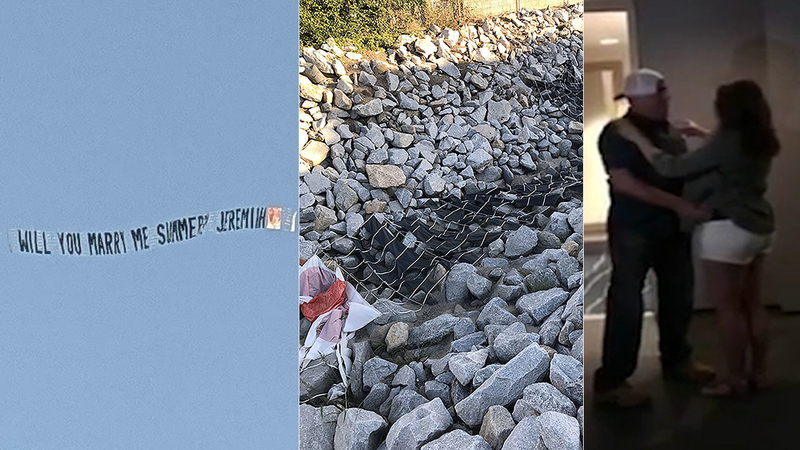 Engagement on after OC marriage banner falls from sky

HUNTINGTON BEACH, Calif. (KABC) -- It was a high-flying marriage proposal that fell to earth unexpectedly - but she said yes anyway.

A now-engaged couple achieved a bit of notoriety in Orange County last week after a banner reading "Will you marry me Summer? Jeremiah" got unhooked from an airplane and fell to the ground.

After it happened, the most important question everyone was asking was: Did Summer say yes?

Eyewitness News was able to catch up with the couple.

It turns out the airplane that was pulling the banner over Huntington Beach was having mechanical problems and had to drop the sign and make an emergency landing, Jeremiah says.

He says he started getting texts from friends who were seeing the mishap on Twitter and wanted to know if that was his sign that had fallen.

So he decided right then and there to pop the question, before his girlfriend looked at her phone and the surprise was ruined.

He had planned the event for months, working to get family and friends together in Orange County for the big day.

Still, he has no regrets.

"All in all, with all the ups and downs of this proposal, we wouldn't change a single thing," he told Eyewitness News. "The funny stories and conversations that came after I popped the question will be memories that will last a lifetime!"
Report a correction or typo
Related topics:
societyorangeorange countyhuntington beachmarriagewedding proposal
Copyright © 2022 KABC Television, LLC. All rights reserved.
TOP STORIES
3 deaths reported after Amtrak train traveling from LA derails
At least 46 bodies found in 18-wheeler in San Antonio
LAPD breaks up multiple street-racing takeovers this weekend
Los Angeles may keep al fresco dining post-pandemic
Abortion protections to be on California ballot in fall
Cache of illegal fireworks found in Azusa home leads to evacuations
Tax refunds for CA: Here's what's included in new relief package
Show More
'Only Murders in the Building' sees everyone as suspect in season 2
Teen girls learn firefighting skills during OCFA empowerment camp
SoCal fishermen snag massive tuna off El Segundo coast
SoCal fire officials strongly condemn fireworks use on 4th of July
3 people critically injured after bus strikes semi-truck near LAX
More TOP STORIES News