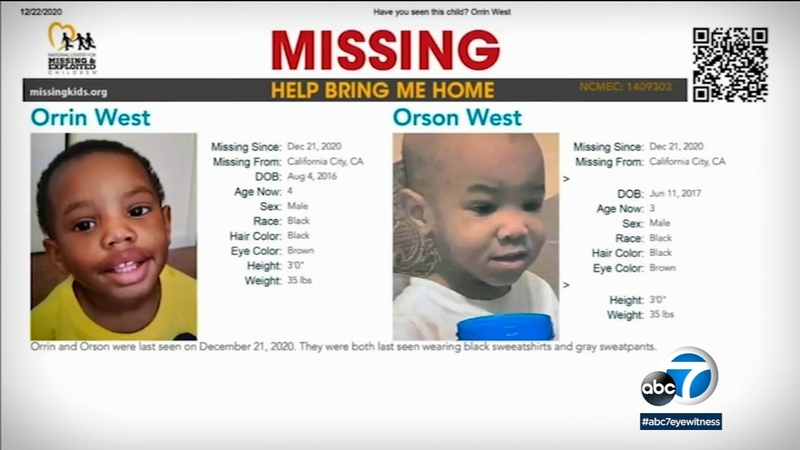 CALIFORNIA CITY, Calif. (KABC) -- Just days before Christmas, Orrin West and his younger brother Orson were reported missing from their home in California City. Nine months later, the search for them continues.

Their adoptive parents maintain the brothers disappeared from their home's backyard Dec. 21 of last year. Orrin was 4 years old and Orson was 3 at the time they vanished.

Police have undergone multiple massive searches for the boys. The case has been frustrating for detectives as they diligently work and try to follow up on possible credible tips while weeding out outlandish conspiracies.

"We've heard alien abduction, everything that you can think of," he said.

More than one month after two brothers disappeared from their small California town, the search for the children continues, and police fear foul play may be involved.

"This is a hard one," he said. "It's one we don't want to mess up. You have two missing kids and they're gone and you have to figure out what happened to them. The stakes are too high."

Pair says they are keeping the case close to the vest, despite being accused of not working hard enough to find the boys because they are African American.

"The people working on this and the people that are invested in this, that's something that never even factors into it, and it's hurtful on a personal level," Pair said. "Nobody likes to be accused of that, but I think the product of the work when the truth comes to light is going to speak for itself."

The community reached out to Eyewitness News for a follow-up story on the mysterious disappearance.

"We deserve to know what happened to those babies," California City resident Robyn Plantz said.

"It's sad. It's heartbreaking and our whole community has been out searching for them and there's no trace of them," Plantz said.

Plantz lives directly behind the home the missing boys apparently shared with their adoptive parents.

However, Robyn says she finds it bizarre the kids turned up missing from their adoptive parents' backyard, yet she never saw children playing in the yard and never noticed any children living at the home. Plantz says she only saw the man of the home coming and going at times.

"There's never been any kids there," Plantz said. "I don't believe the kids were ever here."

Everyone concerned remains hopeful the boys will be found safe and sound before the holidays roll around yet again in a few months.