The pilot was the sole occupant onboard, and was pulled from the aircraft moments before the train came crashing in.
KABC
By Amy Powell 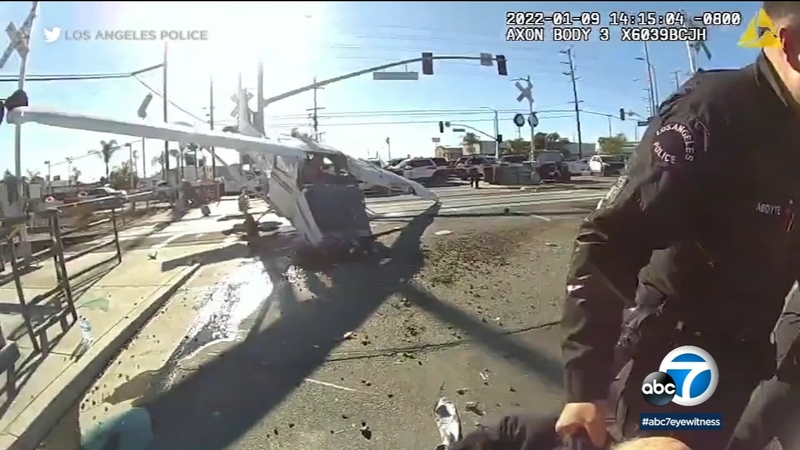 PACOIMA, LOS ANGELES (KABC) -- Shocking video shows the moment a Metrolink train slammed into a small plane that crashed on its tracks in Pacoima on Sunday.

It happened blocks away from the Los Angeles Police Department's Foothill station on Osborne Street, near the Whiteman Airport.

The pilot was the sole occupant onboard, and was pulled from the aircraft - moments before the train came crashing in. The Los Angeles Police Department posted body camera footage of the incident as it was unfolding showing the officers pulling the pilot to safety.

A heartstopping rescue! #LAPD Foothill Division officers pull the pilot of a small plane out of his aircraft after a crash landing. The plane landed on Metrolonk tracks in #Pacoima. A train slamming into the wreckage moments after the rescue. 11pm@ABC7 pic.twitter.com/r3xr2rSavu

According to a tweet posted by the LAPD Valley Bureau, the plane had lost power and crashed onto the tracks.

The pilot was taken to the hospital in an unknown condition. No other injuries were reported.

The damaged plane remained on or near Metrolink Antelope Valley line train tracks, and all train movement was restricted in that area, the LAFD added. One or more lanes of San Fernando Road and Osborne Street were closed in the area while crews investigated the crash and conducted cleanup operations.