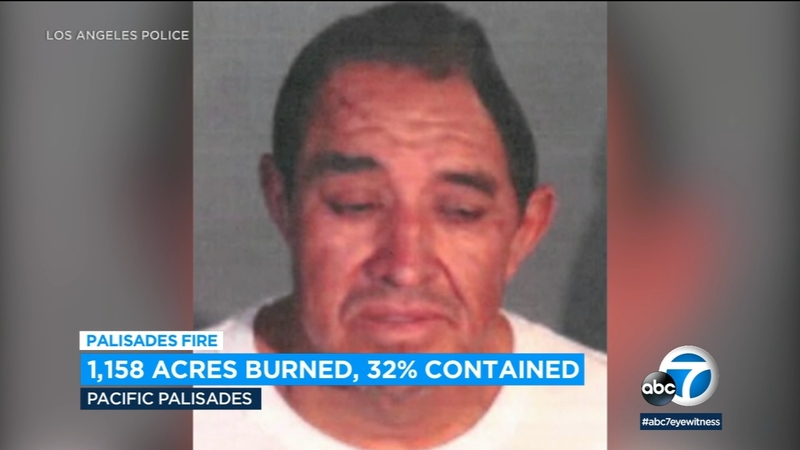 PACIFIC PALISADES, LOS ANGELES (KABC) -- An arson suspect who had been in custody since Sunday in connection with the 1,158-acre brush fire in Pacific Palisades was identified Tuesday morning.

Ramon Santos Rodriguez, 48, was charged Tuesday with one felony count each of arson of a structure or forest and arson during a state of emergency, according to the Los Angeles County District Attorney's Office.

"Helicopter pilots had seen him make multiple sets and ID'ed him starting additional fires," said Erik Scott, Los Angeles Fire Department spokesperson. "So in fact we did have him, not just as an arson suspect, but we were able to completely ID and confirm that, and that's why we arrested him."

Investigators say Rodriguez is homeless, but does not live in an encampment in the fire zone.

On Saturday, police and sheriff's deputies went into the fire zone to capture Rodriguez, but the fire became so overwhelming that authorities had to leave the area. An arrest was made Sunday afternoon.

LAFD Chief Ralph Terrazas said during a press conference on Monday that the suspect was treated for smoke inhalation.

The arrest comes after LAFD arson investigators and Los Angeles police detained and released another person over the weekend.

Information that deemed the fire suspicious was developed thanks to tips from the community and a report from an LAPD helicopter in the area.

"The LAFD Arson Counterterrorism Section, along with LAPD, have aggressively pursued all tips and all leads," Terrazas said. "I want to have a special thank you to the community that provided us those tips and leads. We have to work together as a community. This problem is so significant in terms of major brush fires."

Meanwhile, about 1,000 Topanga Canyon-area residents who were evacuated due to the brush fire were allowed to return home, with the blaze 47% contained and holding at 1,158 acres, officials said Tuesday. Officials previously said the fire was 1,325 acres but later said more accurate mapping showed the fire was at just over 1,150 acres.

As of Monday night, Topanga Canyon Boulevard was reopened to residents, who should be prepared to show ID or a Topanga access card for entry, fire officials said.

LAFD said Tuesday afternoon the evacuation warning has been lifted for residents near the fire.

As of Monday, no structures were damaged. A firefighter sustained a minor eye injury but was expected to be OK, according to Garcetti. LAFD says it is optimistic about increasing containment soon due to constant water drops on remaining hot spots.

The fire first began burning Friday night and prompted an evacuation order for about 1,000 residents over the weekend. Around 7 p.m. Saturday, mandatory evacuation orders were issued for about 1,000 residents in Zone 4 and 6 in the Topanga area, according to the LAFD. That included residents east of Topanga Canyon between the Community and View Ridge, and everyone north of Entrada, south of Oakwood and east of Henry Ridge.

Noting the cool and damp weather, Garcetti said: "The weather is our friend, but it's also our challenge. It's our friend because it caps the fire and the heat; as soon as it lifts it is something that is a big danger.''

He added the vegetation in the area has not burned in several decades, and the terrain is posing a challenge for firefighters.

"The problem and the challenge of it is when that inversion layer is here, it's very difficult to do those sort of air drops that we like to get in there to be more aggressive on this fire',' Garcetti said. "We feel good in the northwest of this fire and the far southwest, but in kind of west-southwest towards Topanga Canyon (the goal) is to make sure that we can build that line and hold that line."

WATCH | What to know about wildfire flame retardant

About 540 firefighters had responded to the area as of Monday, Garcetti said, with water-dropping helicopters working to contain the flames as the steep terrain made it difficult to attack from the ground. Since the burn zone is close to the Pacific Ocean, the marine layer prevented fixed-wing aircraft from dropping Phos-Chek until Monday afternoon.

An evacuation center for large animals was established at Pierce College at 6201 Winnetka Avenue. Small animals can be taken to an L.A. County animal shelter at 29525 Agoura Road.