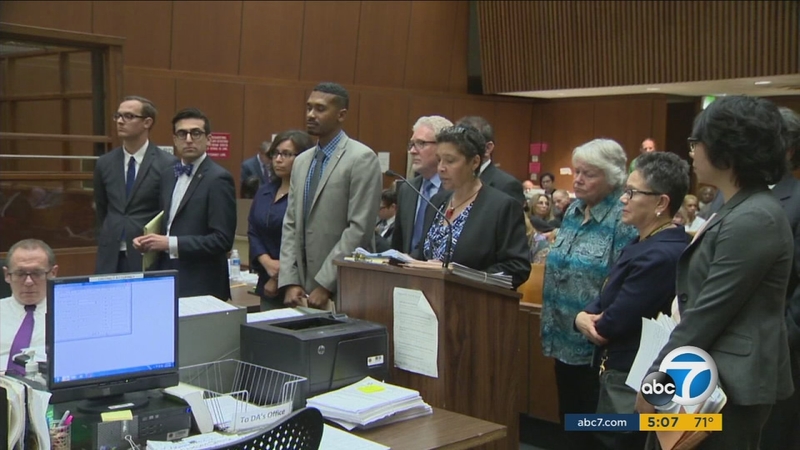 The former employees were accused by officials of being criminally negligent in their supervision of 8-year-old Gabriel Fernandez.

The defendants did not enter a plea as their arraignment was postponed.

Workers with the Department of Children and Family Services in Palmdale, where the defendants worked, walked off the job on Thursday to show support.

"As far as I'm concerned they are innocent. I mean bad judgement maybe, but not child abuse," said retired social worker Darlene Starr who was at the court proceedings.

The social workers were charged with child abuse and falsifying public records in Gabriel's case.

The 8-year-old boy died in his Palmdale home in 2013 from multiple injuries, including a fractured skull, broken ribs and burns over his body.

His mother, Pearl Fernandez, and her boyfriend, Isauro Aguirre, were charged with murdering the boy.

"I believe that these four social workers should be prosecuted. Because of their neglect this child died unnecessary," civil rights attorney Wallace Pate said.

They said the other defendants, former supervisor Kevin Bom and supervisor Gregory Merritt, who was reinstated to his job by the civil services commission, should have known they were approving false reports that conflicted with evidence of the harm the boy was suffering.

The social workers were due back in court on June 4 to be arraigned. Bail for each of the defendants was more than $100,000. If convicted of the charges against them, each could face up to 10 years in prison.
Related topics:
palmdalelos angeleslos angeles countychild abusetrialmurderchild deathhomicide investigationhomicidecourt casedepartment of children and family services
TOP STORIES
Bellflower residents are assaulted after finding home ransacked
Burglars targeting Asian-American communities in Torrance, police say
Passenger jumps out of plane taxiing at Phoenix airport
Vigil held for teen hit and killed by alleged drunk driver in Whittier
Parents charged in school shooting arrested, plead not guilty
LA County's COVID hospitalizations climb back above 600
Our America: Accomplices - The Story of Ady Barkan | Full Episode
Show More
Youth coach accused of inappropriately touching girl in Long Beach
CNN fires Chris Cuomo following suspension, investigation
Omicron COVID outbreak linked to Wisconsin wedding: health officials
L.A. plan to buy state-owned land in El Sereno for affordable housing
Officials say placement of convicted child rapist is 'slap in face'
More TOP STORIES News