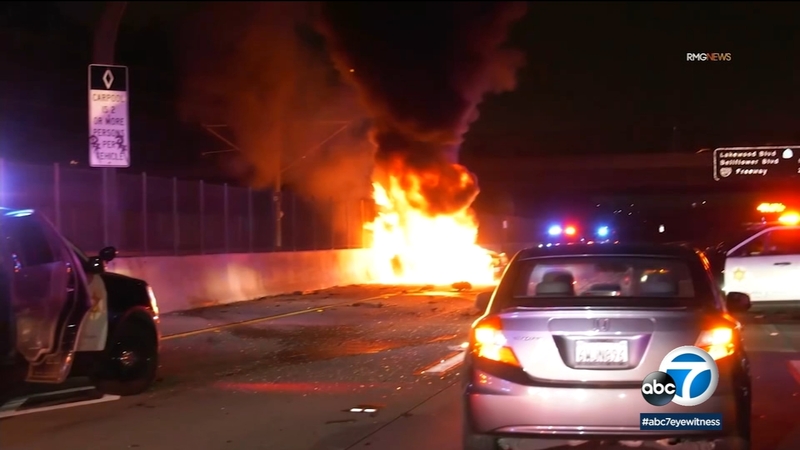 PARAMOUNT, Calif. (KABC) -- Three California Highway Patrol officers were taken to the hospital Thursday morning following a fiery crash on the 105 Freeway in the Paramount area, and a DUI suspect has been arrested.

The crash happened just before 1:30 a.m. on eastbound lanes near Lakewood Boulevard, according to the CHP. That side of the freeway was completely shut down for hours as a result.

The CHP officers were providing traffic control for a previous incident when the driver of an SUV struck a patrol car with two officers inside, CHP officer Kevin Tao said at a morning news conference.

A witness to the crash says the SUV was traveling incredibly fast.

"The person who actually hit the CHP car was in the diamond lane, going 90, 95...definitely faster than I was," said witness Robert Martinez. "They flew right past me...CHP had the lane closed with flares out, the driver applied no brakes and went straight into the CHP car, all four wheels off the ground."

The impact created a fireball, engulfing the CHP cruiser in flames, but those two officers somehow managed to get out before it caught fire.

A third officer that was standing outside the vehicle sustained the most serious injures in the incident, authorities said. The other two officered sustained moderate non life-threatening injuries. All three injured officers are assigned to the Santa Fe Springs CHP office.

The SUV driver, only identified as a 41-year-old woman, was arrested at the scene.

At 7 a.m., officials said all eastbound lanes of the 105 Freeway between Lakewood Boulevard and the 710 Freeway interchange would remain closed for at least four more hours. The freeway was completely reopened shortly after 9 a.m.