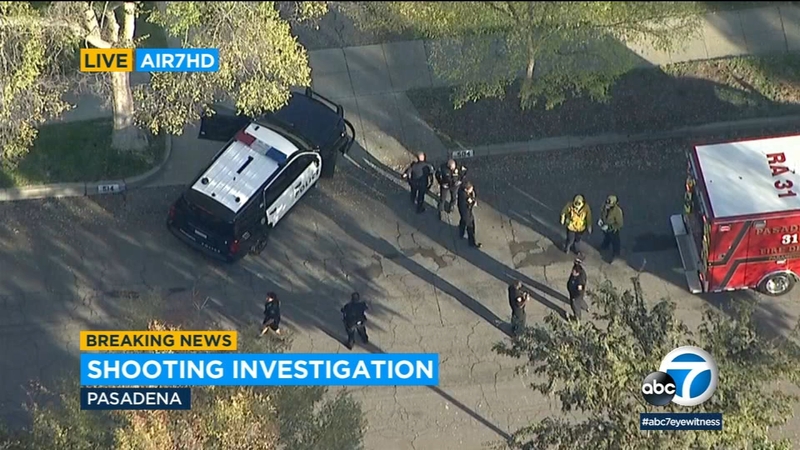 PASADENA, Calif. (KABC) -- A chaotic, violent scene unfolded on the streets of a quiet Pasadena neighborhood Tuesday as a gunman killed one person and then engaged in a carjacking, hostage-taking and gun battle with police that ended in his own death.

The violence happened along the 500 block of North Sunnyslope Avenue Tuesday afternoon. Investigators cordoned off a wide swath of the neighborhood where there were at least three separate crime scenes.

Frightened neighbors said they heard multiple gunshots over an extended period of time.

"It was just a bunch of gunshots at once," said one resident of the neighborhood. "It went on for a while. It wasn't one and done. I heard it go off a couple of times."

The incident started when the suspect shot a 70-year-old man around 2:30 p.m., Pasadena investigators say.

He then attempted to flee the scene by carjacking a woman and keeping her in the vehicle as he tried to drive away.

But as Pasadena police arrived to the area, he jumped out of the car and engaged in a running gun battle with officers on foot down the street.

At one point he grabbed a woman on the street and tried to hold her hostage. She managed to break free and the gun battle continued through the neighborhood.

The suspect then was shot and killed in the driveway of a home on Sunnyslope.

The investigation still has to confirm whether the suspect died from police bullets or possibly a self-inflicted gunshot wound.

The 70-year-old man who was shot was transported in critical condition to a local hospital and was later pronounced dead. Police say the suspect and victim knew each other, but the motive for the shooting remains under investigation.

The identity of the deceased gunman has not been released, but he has been described as a man in his 20s.

The women who were carjacked and held hostage on the street were not wounded. One woman was sitting on a curb near the scene being evaluated and treated by paramedics. She appeared to be distraught but not seriously injured.