Topanga Canyon Boulevard back open in Malibu after mudslide 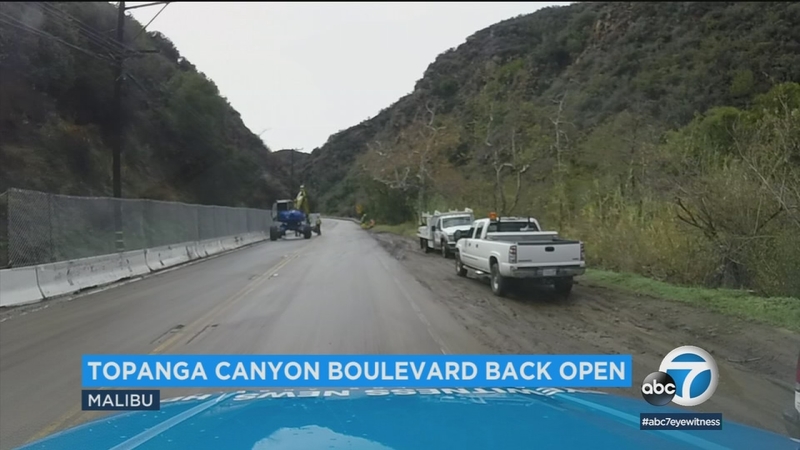 Topanga Canyon Blvd back open in Malibu after mudslide

MALIBU, Calif. (KABC) -- A section of Topanga Canyon Boulevard was reopened Saturday afternoon in Malibu after a mudslide shut it down for more than 24 hours.

Drivers like John Pelliconi had to use alternative routes such as Las Virgenes Road and Malibu Canyon Road as Caltrans continued work Saturday morning to shore up the hillside.

"I think they should have left us a little notice at the top of the canyon," said Pelliconi, who was trying to get from the valley to the beach. "I see the lights and think, 'well maybe they'll just let me go by, and maybe it's just a lane closed,' but to have it completely closed was shocking."

Caltrans announced around 6:30 p.m. that the clean-up operation was complete and both directions were back open. The roadway was closed between Pacific Coast Highway and Grand View Drive since Friday.

#SR27 #TopangaCynBlvd is OPEN. All debris, mud and clean-up operation completed. The contractor and Caltrans Maintenance forces worked together to get the highway cleared and opened within 30 hours of original closure. @CHPsouthern @NWSLosAngeles pic.twitter.com/JjU7zAwhjH

As a steady drizzle came down Saturday morning, crews cleared catch fences on the hillsides and debris and rocks from the road.

It's not an uncommon sight for Topanga residents.

"There was a period a few years ago when a huge boulder the size of that car or bigger came down," said resident Bernard Selling .

He said it took crews about a week to remove the boulder and other debris that came down at the time.