PG&E to move power lines underground to reduce fire risk. Will SoCal Edison do the same? 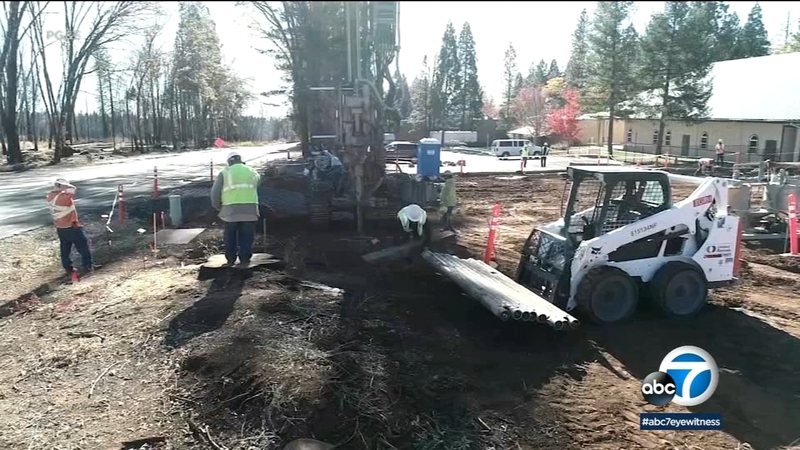 In the aftermath of so many devastating wildfires - many caused by downed power lines - Pacific Gas & Electric has announced plans to move 10,000 miles of power lines underground.

When completed, it would not only make communities in their service area safer but make it much less likely that customers will have their power turned off during red flag warnings.

"We've been hearing it from the people of California," said John Mader an electrical distribution engineer with PG&E. "They don't want the risk of wildfires, but they also don't want the inconvenience of the PSPS events," he said, referring to 'public safety power shutoffs.'

The utility is currently burying power lines at a rate of about a quarter mile a day. So 10,000 miles could take quite some time.

"This is an undertaking that no one else has pursued at this scale, but we know we can do it here," said Patti Poppe, the utility's CEO.

But for PG&E, "here" is Northern and Central California. What about all the exposed lines in Southern California?

California's largest wildfire merged with a smaller blaze and destroyed homes in remote areas with limited access for firefighters.

ABC7 asked Southern California Edison directly if they are planning to move large amounts of power lines underground. The answer: probably not.

Kumar said their focus is to instead insulate many of these lines, although some of them will be buried -- just not at the rate that it will be done in Northern California.

"SCE will underground wires when doing so provides further meaningful wildfire risk reduction," Kumar said. "We have identified up to 17 miles of undergrounding for 2021-22 in targeted, high fire risk areas based on risk and feasibility."

Several years ago, in La Cañada Flintridge, residents near the intersection of Flanders Road and La Cañada Flintridge Boulevard were hopeful that power lines could be buried. The city's public works director told ABC7 the project never happened because of funding issues.

As for PG&E's plans to bury 10,000 miles of lines, the big question is how the utility is going to pay for it.

"We're not yet at the point of scoping all of the costs," PG&E said in a statement. "We will leverage customer and public funding to pursue undergrounding, as the benefits for customers for the long-run are clear - improved safety, less vegetation management needed in our hometowns, and fewer PSPS events."