The iconic Pink's Hot Dogs is turning blue to support the Dodgers in the World Series and selling a Dodgers-themed dog to support the team's charitable foundation.
KABC 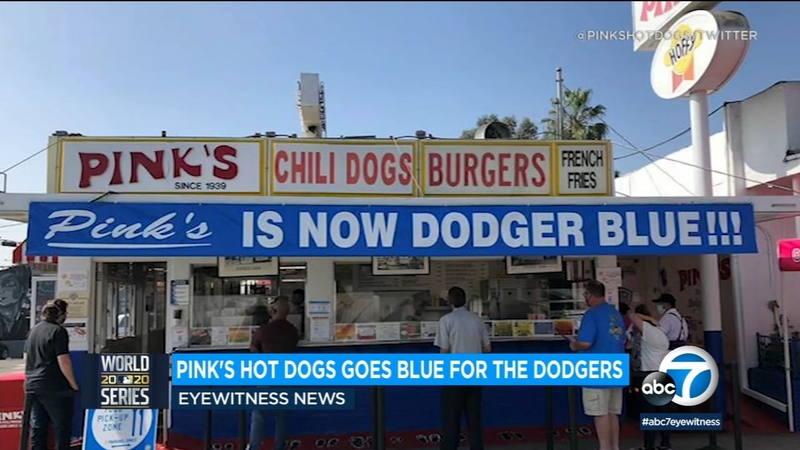 Like it did in 2017 and 2018, the landmark restaurant is going blue to support the Dodgers in the World Series. It has changed its iconic bright pink color to Dodger blue to rally up the team.

The 88 cents represents 1988, the year the Dodgers won their last World Series title against the Oakland Athletics.

Pink's says 100% of the proceeds from the blues bacon chili cheese dogs will go to the Dodgers Foundation.

The 2020 World Series kicked off Tuesday night. The Dodgers dominated in Game 1 against the Tampa Bay Rays in Arlington, Texas. The teams return to the field Wednesday for Game 2.

PINK’S GOES BLUE, DODGER BLUE.
PINK’S HOT DOG STAND HAS CHANGED ITS COLORS FROM PINK TO BLUE TO LIGHT UP LOS ANGELES DODGER BLUE IN HONOR OF THE DODGERS IN THE WORLD SERIES.
100% of proceeds from Blues Bacon Chili Cheese Dogs will go to @DodgersFdn @FOXLA pic.twitter.com/L1BWS1wJ3R