Amid chaotic crowds in downtown LA, several pedestrians surrounded a police cruiser and two were struck as the SUV tried to escape.
KABC
By ABC7.com staff 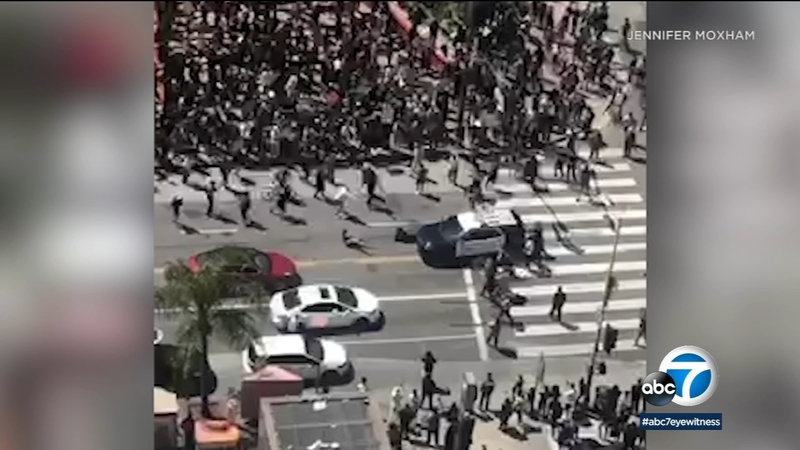 DOWNTOWN LOS ANGELES (KABC) -- Amid the chaotic crowds in downtown Los Angeles, video shows several protesters surrounding a police cruiser and two of them getting struck as the SUV tried to escape.

The video was shot Sunday afternoon from a tall building overlooking Pershing Square. Hundreds of people had gathered on the sidewalk at the intersection and dozens had spilled out into the street as well, walking in between cars.

The protests were in connection to nationwide movements to protest the death of George Floyd in Minnesota.

In the video, the police SUV stops near the Pershing Square intersection where hundreds of people have gathered on the corner and a few people are walking on the street.

As the SUV stops, several in the crowd start to surround the police vehicle.

The cruiser accelerates to get away and at the same time, two people run into the vehicle's path and are knocked down.

The SUV immediately stops. It then quickly hits reverse and nearly strikes several other pedestrians who had gathered behind the vehicle.

After making a U turn to get out of the crowd, the police vehicle leaves the scene as one person is seen throwing something at the back of the SUV.

The two people who were struck fell to the ground but it did not appear they were seriously injured.

The LAPD says the officers were responding to a possible robbery when they encountered the protesters. The fire department responded but could not find any victims. The incident is under investigation.

We are aware of video circulating on social media of an LAPD patrol vehicle involved in a traffic collision with a pedestrian, during one of several spontaneous protests occurring throughout the city. A traffic report was taken and the incident is under investigation.