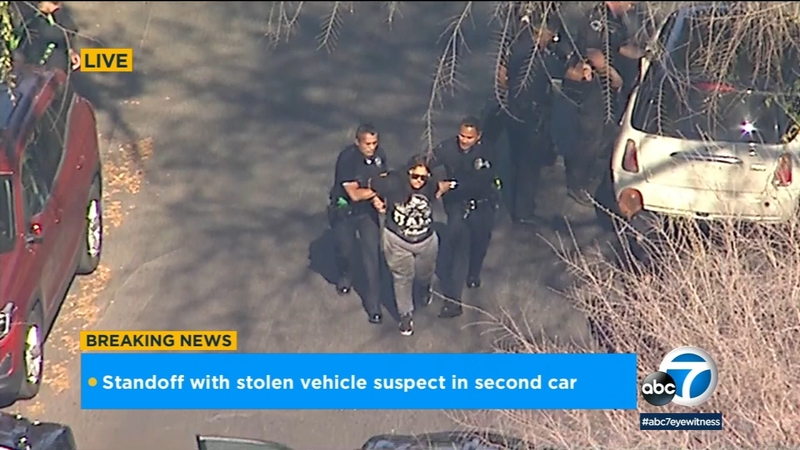 LOS ANGELES (KABC) -- A woman who led authorities on a hour-long chase in a stolen cargo van was taken into custody Friday morning in the El Sereno area, along with another motorist who gave the suspect a ride at the tail end of the pursuit.

The chase initially made its way from the San Gabriel Valley to the downtown Los Angeles area and back. It began in the El Sereno area and headed westbound on the 10 Freeway before the woman behind the wheel exited onto surface streets.

California Highway Patrol and Los Angeles Police Department vehicles later disengaged at some distance, apparently out of concern for public safety due to the van's speed. An LAPD helicopter continued to follow the vehicle from overhead.

In a bizarre moment, the driver pulled over on a residential street and placed a carton of unknown contents on the sidewalk before getting back into the van. As police approached, the suspect drove off again and headed toward Alhambra.

Later, a civilian's black sedan pulled up alongside the moving van and kept pace with it on the street for several minutes after the two vehicles almost collided. It wasn't clear why the driver of the car became involved in the chase due to possible road-rage.

The driver of a stolen cargo van stopped during a police chase and placed a carton of unknown contents on a sidewalk before getting back into the van.

The van driver's speeds then slowed comparatively as the police pursuit meandered through the neighborhoods of Boyle Heights and Lincoln Heights.

The driver then stopped in El Sereno, exited the van and got into a white Mini Cooper. Police followed the compact car for several miles before it stopped in the middle of a street and a standoff ensued.

The driver and another occupant were taken into custody just after 11 a.m.