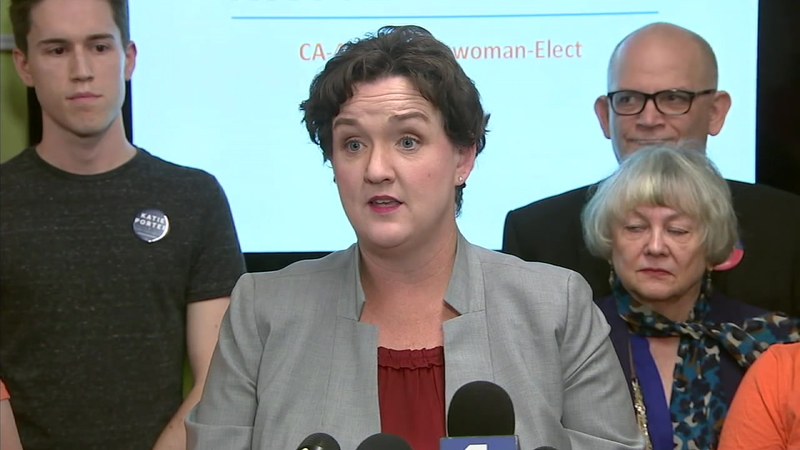 IRVINE, Calif. (KABC) -- In what was long considered to be a Republican stronghold, Katie Porter has captured the 45th congressional district in Orange County, becoming the first Democrat to hold office there.

The Associated Press declared Porter the winner Thursday, nine days after the election.

Porter said she was on a plane at the time.

"My experience was basically turning off the airplane mode, and I had 167 text messages," laughed Porter to a small crowd of supporters and journalists at her campaign's headquarters in Irvine. "The first thing I thought was 'I don't know how to respond to all of these people.'"

The election has yet to be certified, but as of November 16th, Porter held a 51.2 percent to 48.8 percent advantage over Republican incumbent Mimi Walters, who has conceded the race.

"I congratulate Ms. Porter on her victory," Walters said in a statement on Facebook. "It has been a tremendous honor and responsibility representing the people of the 45th District. I am proud of our accomplishments. Our fiscal and regulatory policies have created record job growth; we cracked down on human trafficking and passed legislation helping the survivors of sexual assault. New opportunities and challenges lie ahead and I will forever be grateful for the opportunity to serve in the People's House."

Porter doesn't deny that some of President Donald Trump's statements and actions have helped turn many longtime Republican districts in the favor of Democrats.

Porter has pushed a liberal agenda, advocating overturning President Trump's tax reform package and supporting universal health care. But before she can do any of that, she said Democrats need to push for campaign finance reform.

She also wants to see some rule changes in the House.