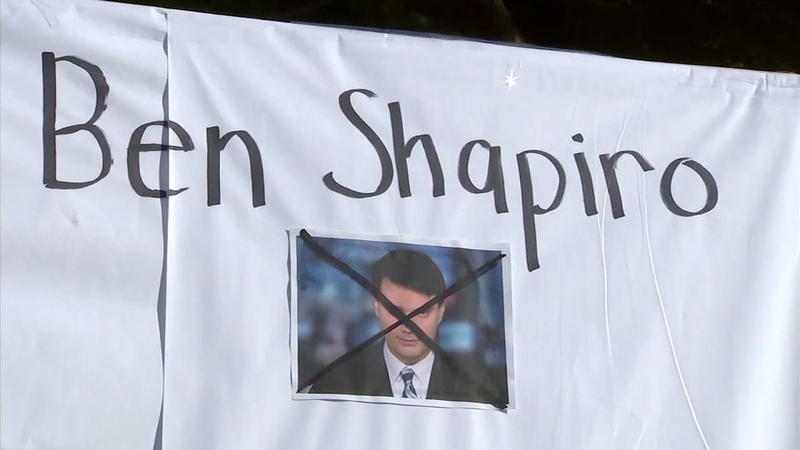 There was heavy security around the Ackerman Grand Ballroom, where 600 people came to listen to Shapiro speak. The conservative commentator spoke about several issues, but focused on free speech on campus.

"This is why there's an always an attempt to shut me down on campus because the idea is that the things that I say are so inherently dangerous - they're so dangerous and so scary that they provide a challenge to the existing mode of authority," he said.

Organizers said tickets to the lecture titled, "Ben Shapiro: The Rise of Campus Fascism," sold out quickly. Around 600 tickets were sold with 300 others on the standby.

The event was sponsored by the Bruin Republicans and the Young America's Foundation.

Shapiro, who is a Bruin alum, currently hosts the podcast, The Ben Shapiro Show, and is the editor-in-chief of the Daily Wire. People who came to hear him speak said all speech needs to be protected.

The line for the speech formed around 3 p.m. with doors opening one hour later. The speech started at 6 p.m.

One protester said he believes the majority of the people attending Shapiro's event would not be from the UCLA community.

"If you look (Shapiro) up online, you'll find a slew of really problematic things that he's said, things that he supports. Most UCLA students don't support that...The UCLA community as a whole does not think that transgenderism is a disorder," Henry Degroot said.

UCLA will pay for security costs as long as at least 70 percent of the attendees are students, faculty or staff. Otherwise, the organizers will be asked to pay for additional security costs.

By the end of the night, organizers said the speech was a success and police said no one was arrested.