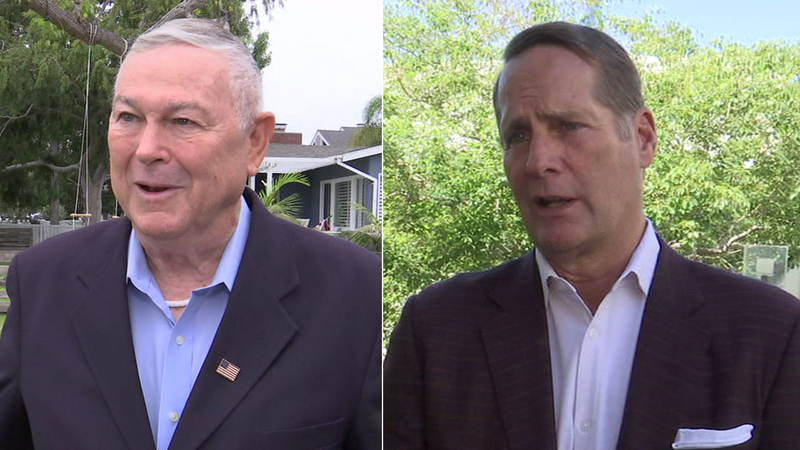 LOS ANGELES (KABC) -- Democrats have marked 15-term incumbent Dana Rohrabacher, who represents a large section of Orange County, as the most vulnerable republican in the country.

"I'm confident that I will win this election, but it is the toughest fight that I have ever been in," said Rohrabacher.

Rohrabacher's challenger, businessman Harley Rouda, is a former Republican who has never served in Washington. In a New York Times Siena College poll from early September, Rohrabacher and Rouda are tied at 45 percent.

Rohrabacher thinks he'll prevail because he said his beliefs are in line with those of his constituents.

"Anybody who would say that we should give medicare to illegal immigrants is not in tune with what the people of this district want," said Rohrabacher.

"I do not believe in open borders. I believe in strong borders. I believe in compassionate immigration reform as well. So his narrative that I am just another left-wing liberal, is flat out incorrect. Yet, we can look at his statements, his positions, how he has voted on certain bills, and we know he's an extremist," said Rouda, who is running for the 48th Congressional District.

Rohrabacher's fierce support of President Donald Trump hasn't resonated with everyone in the 48th District, which has become younger and more diverse. A speechwriter and special assistant to Ronald Reagan, Rohrabacher's ties to Russia have come under scrutiny.

"I know I can be more effective than Dana Rohrabacher. He's been there 30 years. He's passed three pieces of legislation, most recently 14 years ago," said Rouda.

On the controversy surrounding trump's Supreme Court nominee, Rohrabacher believes Brett Kavanaugh will get confirmed, but he said Christine Ford has every right to testify.

"We have to look at all the evidence that's being given to us in this case based with a great deal of skepticism because clearly the Democrats are making a political power play and using her as a political pawn," said Rohrabacher.

Rouda on the other hand, like most democrats, believes the FBI investigation into Kavanaugh should be reopened.

"We need to provide the time for the proper investigation to take place before Kavanaugh is fully considered as a potential member of the Supreme Court, a position for life," said Rouda.