KABC
By Adrienne Alpert and Lisa Bartley
LOS ANGELES (KABC) -- Eyewitness News learned that Los Angeles County sheriff's Deputy Caren Carl Mandoyan has been ordered to turn in his weapon and badge in what's become a showdown between Sheriff Alex Villanueva and the Los Angeles County Board of Supervisors.

Mandoyan was fired in 2016 by former Sheriff Jim McDonnell after he was accused of physically assaulting and stalking his girlfriend, a female deputy. A Civil Service Commission upheld Mandoyan's termination, but Villanueva reinstated Mandoyan as one of his first and most controversial acts in office.

Mandoyan was a trusted volunteer on Villanueva's campaign and served as Villanueva's driver, although the sheriff has stated "there's no quid pro quos" for anyone who was involved in his campaign.

In a letter obtained by Eyewitness News, L.A. County Auditor-Controller John Naimo wrote to Mandoyan, "your reinstatement was unlawful" and "you are not authorized to serve as a Department employee."

The letter goes on to state that Mandoyan's "salary and other benefits" were stopped effective Feb. 22 and that "Sheriff Villanueva was informed on this fact on February 20th, 2019, but it is my understanding that he declined to communicate this message to you."

If true, that contradicts what Villanueva told Eyewitness News on Wednesday when asked about Mandoyan's employment status by reporter Miriam Hernandez.

"The status is he remains employed by the organization," Villanueva said.

Miriam Hernandez asked, "So you don't believe you will have to fight to keep his reinstatement?" 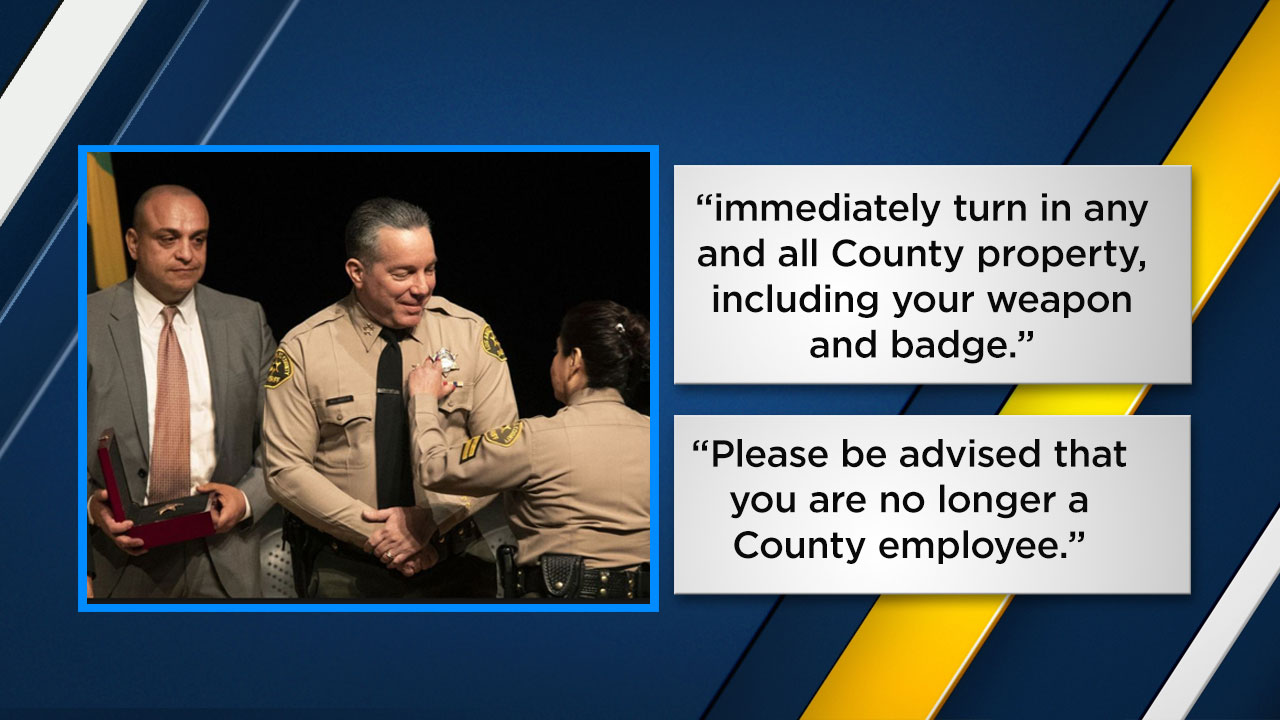 This is the latest round in a rare public confrontation between the sheriff and the board that kicked off with a tense meeting in late January. The sheriff is independently elected, although supervisors control the department's $3.4 billion budget.

"None of us is so independent that we can do anything we damn well please," Supervisor Sheila Kuehl told Villanueva regarding Mandoyan's rehiring.

On that day, Villanueva told supervisors that his department treats every allegation of domestic violence with serious consideration, but insisted that Mandoyan's termination "did not rise to the level of a discharge."

In her 2015 application for a temporary restraining order, Mandoyan's former girlfriend alleged that he once broke into her house, threw her down on a couch and tried to strangle her.

"Remember, I have eyes and ears everywhere," Mandoyan told her according to the application for a restraining order.

The order was dissolved after neither Mandoyan nor the woman appeared for a follow-up hearing.

The L.A. County District Attorney's Office investigated but declined to file criminal charges in the case, citing a "lack of sufficient evidence." The declination memo states that the victim provided photos of minor injuries taken after the alleged assault and video of him on two occasions trying to get into her house.
Mandoyan has not responded to several requests for comment through his attorney, but challenged the accusations against him in the two civil lawsuits he filed to fight the department's decision to fire him.

In a recent motion, L.A. County Supervisors cited their "grave concerns" about Mandoyan's re-hiring, writing that it "sends a disturbing message that a crime victim should not be believed based on the timing of the allegations and one person's doubt about his or her credibility."

After the contentious late January meeting, supervisors directed county counsel to research the L.A. County Charter and other laws to see how to proceed when there is such a conflict between the board and sheriff.

The letter to Mandoyan, dated Feb. 28, notes that the L.A. County Sheriff's Department agreed to reinstate Mandoyan "in exchange for the dismissal by you of two civil actions filed by you."

"This letter is to notify you that under the Los Angeles County Charter and other laws, Sheriff Villanueva was without authority to settle your cases on behalf of the County. The County Charter and other authorities vest the County Counsel and the Board of Supervisors with sole and exclusive authority over civil actions and proceedings involving or concerning the County or a County officer. For that reason, your agreement with the Department is void," it said.

Villanueva issued a statement to Eyewitness News regarding the matter.

"This personnel matter is under review and will be decided through the legal employment process. While the specific facts of this case are protected under the Peace Officer Bill of Rights and civil service procedures, I can assure that an objective, honest, and fair assessment was conducted before reinstatement. We will let the process continue forward as we work to determine the final outcome," it said.