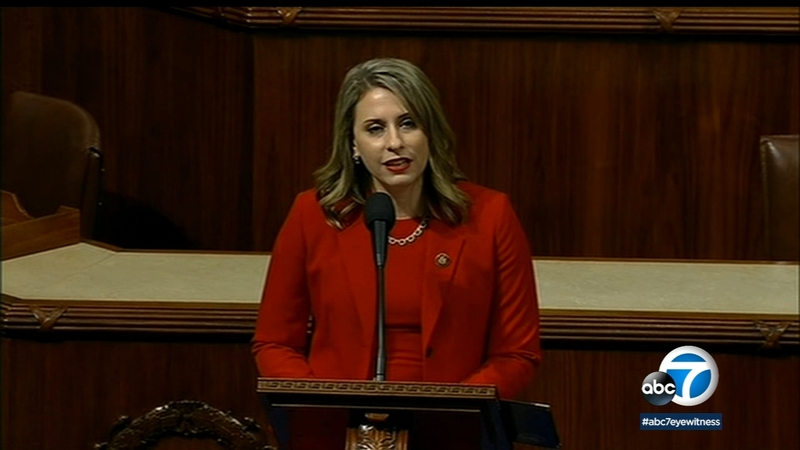 WASHINGTON (KABC) -- Congresswoman Katie Hill delivered her final speech on the House floor Thursday, saying she is leaving because of a "double standard."

Hill, who was elected last year, blamed political opponents and a misogynistic culture.

Her last vote was on the impeachment proceedings against President Trump.

In her home district, some constituents are speaking out.

"I think it is a good thing, obviously we didn't send her there to do that when she got elected," said Valencia resident Jose Valle.

"I think in general we are all a little disappointed about it because she worked really hard, and I think most residents around here were looking for a change," said Victoria Carlin of Santa Clarita.

"I am leaving because of a misogynistic culture that gleefully consumed my naked pictures," Hill said on the floor.

"I am leaving, but we have men who have been credibly accused of intentional acts of sexual violence and remain in board rooms, on the Supreme Court, in this very body and worst of all, in the Oval Office," she said.

"She was not very nice to the woman that she was having a relationship with," Messina told Eyewitness News after viewing some of Hill's text messages.

Hill, who describes herself as bi-sexual, admits to a relationship with a female campaign aide, but denies an affair with a male staff member, which would violate House rules.

She says she will continue to fight gender bullying.

To add the chaos in the 25th Congressional District, multiple candidates have signed up to take Hill's seat, however, no date has been set for special election.