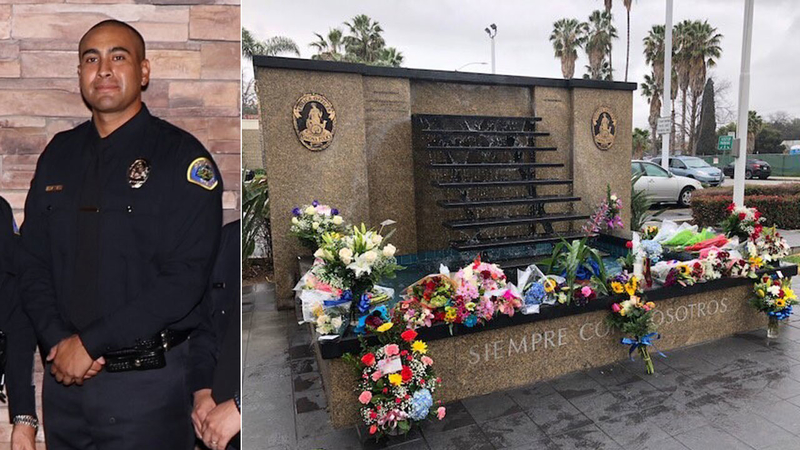 POMONA, Calif. (KABC) -- The fatal shooting of a 30-year-old Pomona police officer led to an outpouring of grief and condolences on social media and in the community on Saturday.

Private citizens, elected officials, law enforcement agencies, firefighters and police chiefs mourned the death of Greggory Casillas, one of two officers who were shot the night before, during a standoff with a gunman at an apartment complex.

The second officer remained hospitalized in serious but stable condition after undergoing surgery and is expected to survive.

"Another hero gone too soon," Los Angeles Police Department Chief Charlie Beck said on Twitter. "These tragedies are occurring too often, and the pains of sacrifice will never be forgotten. Our thoughts and prayers are with the @PomonaPD today."

Another hero gone too soon. These tragedies are occurring too often, and the pains of sacrifice will never be forgotten. Our thoughts and prayers are with the @PomonaPD today. https://t.co/l4LwuO36lz

Beck's tweet included an earlier one from Pomona Police Chief Michael Olivieri, who had announced Casillas's death "with a heavy heart."

"Please keep the men and women of the @PomonaPD / @PomonaPOA in our prayers," the Burbank Police Department said in an Instagram post, which included a photo of an officer's badge with a black band across it. "RIP Brother."

On Saturday afternoon, the barricade situation finally came to an end with the suspect taken into custody after 15 hours. The Los Angeles County sheriff's SWAT team was among multiple law enforcement agencies at the scene.

"No words or actions can express how we feel for our brothers and sisters at the Pomona PD, the families and friends of all those involved!" the sheriff's Transit Bureau said on Facebook. The post included a photo of a K-9 that participated in the procession that escorted the slain officer's body from the hospital to the county coroner's office.

At the Pomona Police Department, residents, other law enforcement members and military personnel came by to drop off flowers and other items to honor Casillas at a makeshift memorial set up at a fountain in front of the building.

Casillas' body arrived at the coroner's office earlier Saturday after a procession was held for him.

He joined the department in 2014 as a records specialist, then worked as a jailer before becoming a police recruit.

He is survived by his wife, two young children, parents and two brothers.

A memorial fund has been set up in Casillas' name. To donate, visit: https://cahpcu.org/officer-greggory-j-casillas-memorial-fund/.

Heartbroken about the shootings in Pomona and Yountville. My thoughts are with the victims and their families and I am extremely grateful to law enforcement and first responders who bravely rushed to help.

The @PomonaPD family are in our thoughts and prayers. Earlier this morning, one of two of their finest officers succumbed to their injuries from a gun shot wound. The second officer is recovering from his injuries. #RIP #EOW