Pomona officer charged with civil rights violations, 2 others charged in cover-up for 2015 beating of minor 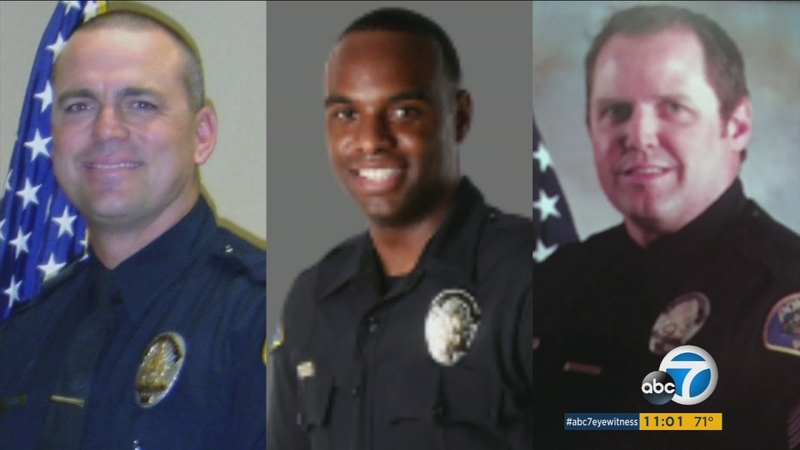 LOS ANGELES (KABC) -- Three Pomona police officers surrendered Thursday morning to face federal charges on suspicion of one officer violating a minor's civil rights during a beating at the Los Angeles County Fair in 2015 as well as accusations of a cover up.

Pomona police Cpl. Chad Kenneth Jensen, 50, is charged with deprivation of rights under color of law on suspicion of beating the minor, identified as 16-year-old Christian Aguilar, on Sept. 16, 2015.

According to the indictment against Jensen and the other two officers, he is suspected of violating the victim's constitutional rights, including the right to be free from the use of unreasonable and unnecessary force and that the suspected assault resulted in bodily injury.

"I think it justifies everything we've put forward. I think that anytime that you can have the FBI be involved and then the federal government, I think that it adds credibility to what we believed and what we were saying all along," family attorney David Gammill said.

Gammill represented the family in a civil suit against the Pomona Police Department.

The 2015 encounter began when Aguilar's cousin had words with one of the officers and ended when Jensen punched the teen.

Jensen and his partner, Officer Prince Taylor Hutchinson, 31, are also charged with preparing false reports that tried to justify the use of force.

The indictment alleges that Jensen falsely wrote in the report that the minor tried to punch him in the face and that the young kid came within arm's reach of another officer, who was escorting a person who had been arrested.

Hutchinson is also accused of writing a report that falsely stated the victim came within two-to-three feet of the officer who was moving the arrestee and that the victim tried to incite unrest in a crowd at the fair as the minor was being moved to a holding facility at the location.

Gammill said the video captured at the scene is the key to the case and that officers modified it to support their story.

"You watch the two videos and you think, 'My god. They altered the video.' It's the stuff of movies," he said. "The full video shows that Christian is face forward against the fence and that he's spun around by Officer Jensen and that he never swings and then Jensen starts unloading forearms."

The partners are also charged with obstruction of justice for giving false testimony during court proceedings about criminal charges against the young victim. During those proceedings, Jensen and Hutchinson are suspect of providing false testimony similar to what was given in their reports.

According to a news release from the central district of California, the two officers' testimony created the impression that the minor posed a physical threat to other officers before Jensen assaulted him.

The third person involved in the case, Sgt. Michael Timothy Neaderbaomer, 49, was assigned to the Pomona Police Department's internal affairs unit. He is charged with obstruction of justice for making false statements to the victim's family in order to dissuade them from reporting the incident to other law enforcement.

According to the indictment, Neaderbaomer "attempted to intimidate and corruptly persuade" the victim and his family by claiming the department had video showing the victim punching Jensen.

Neaderbaomer also told the victim's mother that the child's parents would not be allowed to attend the victim's interview in retaliation to a citizen's complaint, which is a violating of the department's policy, according to the district release.

The sergeant is also charged with making false statements to FBI agents, who were investigating the suspected civil rights violating by Jensen.

The Pomona Police Department released a statement after the indictments.

"The Pomona Police Department will continue to fully cooperate with the U.S. DOJ, as it had since the beginning of their investigation," the statement said.

Gammill said the teen and his family finally feel vindicated.

"Their hope is that one, they're finally held responsible for what they did. I think two is that those officers get what they tried to deprive the Aguilar family of and that's just justice and fairness," he said.

The department said all three officers are now on paid administrative leave.

All three officers were arraigned in the afternoon in U.S. District Court. They entered not guilty pleas and were ordered released on $50,000 bail. A trial is scheduled for Dec. 19.