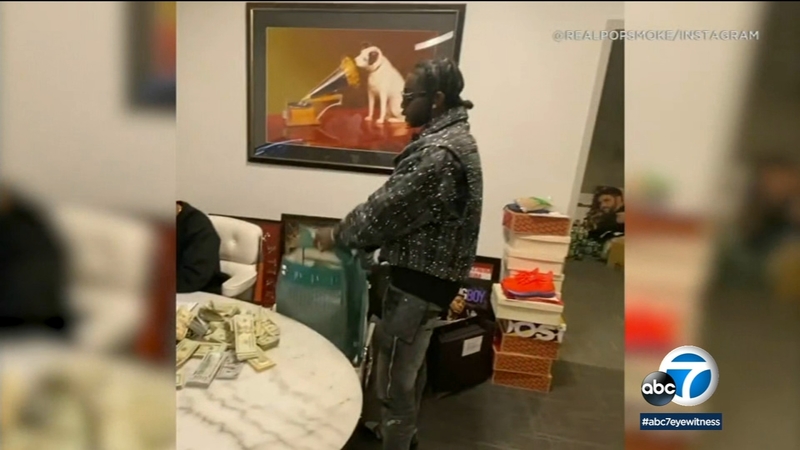 Officers responded to the 2000 block of Hercules Drive in Mount Olympus just before 4:30 a.m. after multiple suspects, including at least one wearing a black mask, broke into the home. The victim, whose real name is Bashar Barakah Jackson, was then shot and transported to Cedars-Sinai Medical Center, where he was pronounced dead, sources say.

Officials have not yet said whether it was a targeted or random attack. However, sources told ABC News that detectives determined it was gang related. Pop Smoke was known to be connected to gang members and authorities are investigating whether the killing was connected to the rapper's recent arrest by federal prosecutors in Brooklyn, New York, after the 20-year-old allegedly stole a Rolls Royce that he borrowed for a music video in California, ABC News reports.

Sources tell ABC News that the Brooklyn-born rapper was released on bond, which allowed him to travel to Los Angeles.

Los Angeles police have been in contact with local and federal law enforcement officials in New York regarding Jackson's case in Brooklyn to determine if there is any connection to the deadly shooting, according to ABC News.

Recent social media posts showed the rapper with stacks of cash. He also posted a video of designer merchandise in bags that displayed the address of the Mount Olympus home.

Eyewitness News' sister station in New York reports the home is owned by Edwin Arroyave and his wife Teddi Mellencamp, daughter of singer John Mellencamp and star of "The Real Housewives of Beverly Hills."

"We were informed by a 3rd party leasing and management company overseeing a rental home we own in Los Angeles that a shooting had taken place at the property," Teddi Mellencamp posted on Instagram. "Foremost, we would like to extend our prayers and condolences to the family and loved ones affected by this tragic loss of life."

LAPD Capt. Steve Lurie said at a press conference that Wednesday's 911 call came from someone on the East Coast, who was a friend of someone inside the residence and had been contacted by that friend in the home.

Lurie said the LAPD was not yet identifying the victim.

No arrests have been made. Lurie said multiple people were detained inside the residence but later released.

Pop Smoke's rise to fame came last summer with the hit song "Welcome to the Party."

He was one of five rappers New York police prevented from performing at the Rolling Loud hip-hop festival in Queens last October because they were "affiliated with recent acts of violence citywide."

He also had the popular hit "Gatti" with Travis Scott and Jackboys, as well as "Dior."

Tributes from artists have poured in on social media.

Nicki Minaj collaborated with the rapper on the official "Welcome to the Party" remix, which was released in August. At its peak, it reached No. 9 on the Billboard chart for top rap songs.

She posted on Instagram that "The Bible tells us that jealously is as cruel as the grave. Unbelievable. Rest in Peace, Pop."

No such thing as success with out jealousy, treachery comes from those who are close. R.i.P pic.twitter.com/5Ej7ZHTc10

"No such thing as success with out jealously, treachery comes from those who are close. R.i.P," he wrote.

One fan who came to the site of the shooting mourned the loss of the rapper, who some say was poised to have a breakout year.

"I heard about what happened. I'm a New Yorker myself...so that's why I came by just to show some respect," Patrick Byas said. "It's just sad. It's just real sad."