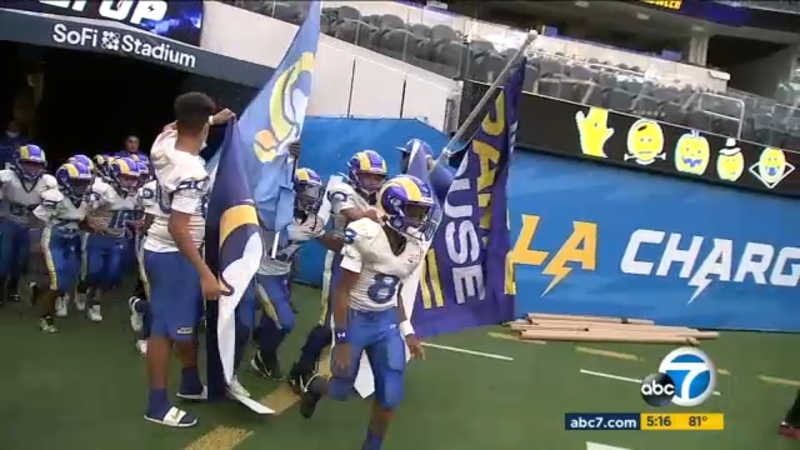 INGLEWOOD, Calif. (KABC) -- The Los Angeles Rams have been mentoring and inspiring student-athletes through their Pop Warner youth football program for years. Thursday, some of those kids along with others got a once in a lifetime opportunity to play at SoFi Stadium.

"There are no words," said Daniel Vasquez, a parent of one of the Watts Rams players. "This whole week, I've just been telling him 'soak it all in' because stuff like this don't happen every day."

Pop Warner's Southern California Conference hosted its annual championships at SoFi Stadium and its the first youth sports organization to play there.

"It's a dream come true for me, the Watts Rams' family, all the parents, everybody behind the program," said Zarren Thompson, the Watts Rams head coach. "It's been great."

Of the five games being played at the stadium, two of the games featured two Watts Rams teams. A Junior Pee Wee team and a 12 and under team and it took a lot of hard work to get there.

"We went from practicing Tuesday through Friday, sometimes even Sundays," said Emily Guerrero, a parent of one of the Watts Rams players. "We'd get together and just try to push them as hard as we could."

The Watts Rams is a youth football program started and coached by LAPD officers that puts as much emphasis on academics as they do on football. In 2019 the Rams took on a sponsorship role for the program and have been supporting the young players ever since.

Winners from Thursday's games will go on to play regionals for a chance to compete in the 2021 Pop Warner Super Bowl which takes place in Orlando, Florida.