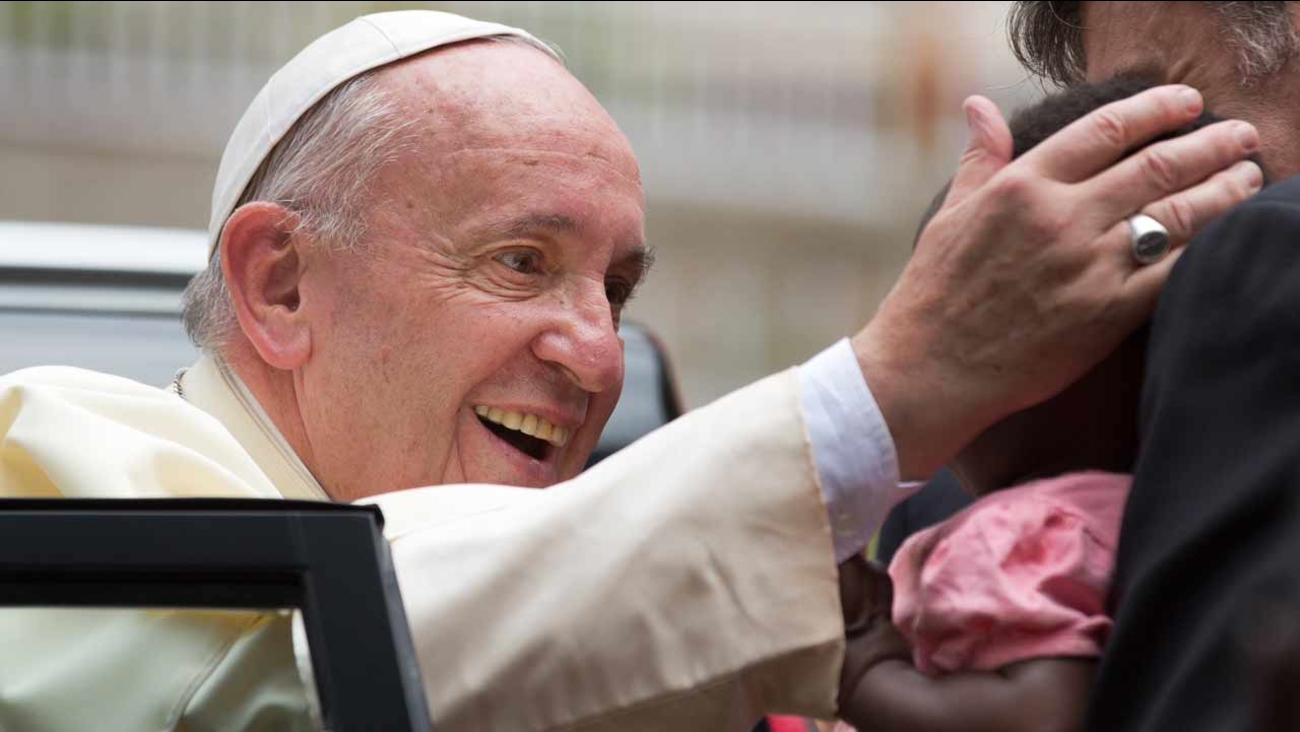 Pope Francis reaches out to kiss a baby carried by an aide from the crowd, after leading a Holy Mass for the Martyrs of Uganda Saturday, Nov. 28, 2015. (Ben Curtis)

KAMPALA, Uganda -- Pope Francis travels Sunday to Central African Republic, making the final stop of his first trip to Africa in a country where violence between Christian and Muslim militants has forced nearly 1 million from their homes over the last two years and created a divided capital.

The precarious security situation in the capital of Bangui had raised the possibility in recent weeks that the pope could cancel his visit. Less than a year ago, mobs were beating Muslims to death in the streets, even decapitating and dismembering their victims. While sectarian clashes have left at least 100 people dead over the last two months, recent days have been relatively free of gunfire.

Many hope that the pope's message of peace and reconciliation can usher in a longer-term stability in a nation of 4.8 million. As part of his trip, the pope plans to visit a displacement camp where Christians have sought refuge. He also will venture into the capital's Muslim enclave, known as PK5, to meet with community leaders and the displaced.

President Catherine Samba-Panza told reporters Saturday that the pope is being awaited as a "peace messenger."

"Many Central Africans hope that the messages he will deliver will inspire a national mobilization and realization that Central Africans learn to accept each other again, learn to live together again and learn to go toward peace and reconstruction of their country," she said.

At the displacement camp at Bangui's airport, where thousands have lived for nearly two years, there is a sense that things now are the worst they've been since December 2013. Sandrine Sanze and her family are now back for a second time after the recent clashes, having initially spent nine months there.

"It is our prayer that with the pope's visit that peace will return, we can go home and life can start anew," she said, as she sat on the ground outside her home made of scrap metal that she and her husband dragged to the site.

The situation remains tense and fragile: Bangui's archbishop travels into the city's Muslim enclave under escort from armed peacekeepers. The city of Bangui has long been under a nightly curfew of 8 p.m. as gun battles have rung out after dark in the flashpoint neighborhoods.

The United Nations sought to assure the Vatican that security was under control on the eve of the pope's arrival. The head of the U.N. operation, Parfait Onanga-Anyanga, told Vatican Radio that U.N. peacekeepers and French troops were confident that they could keep the pope and his entourage safe.

"Certainly, you can't exclude that a saboteur might try to disrupt the calm, but we're ready to respond in the most efficient way possible," Onanga-Anyanga said.

The bloodshed dates back to early 2013, when a coalition of mostly Muslim rebel groups from the country's anarchic north overthrew the Christian president. Their power grab was more about greed than ideology, yet their reign saw hatred rise as the rebels carried out brutal attacks on civilians. After the rebel leader stepped aside in early 2014, a wave of retaliatory violence by anti-Balaka fighters forced most of the capital's Muslims to flee. Human Rights Watch said there are only 15,000 remaining, down from around 122,000.

Central African Republic was organizing democratic elections for December when the death of a young Muslim taxi driver in late September reignited tensions. Within hours, the Muslim fighters, called the Seleka, retaliated in attacks on Christians in the neighborhoods surrounding PK5.

The Muslim community in PK5 was eager to welcome Pope Francis, Onanga-Anyanga said. Earlier this week, workers were busily repainting the cream-colored mosque he is due to visit a vibrant mint green.

"The opportunity of the pope's visit reminds us that aside from being a head of state, he's also a spiritual leader," he said. "And it's perhaps in this dimension that the Central Africans can find the energy, the inspiration so that the country can find the will to reconcile with itself, and that it can plan a future in which all the Central African children can live in unity."
Related topics:
religion & spiritualitypope francispopeafricau.s. & world
Copyright © 2021 by The Associated Press. All Rights Reserved.
POPE FRANCIS
Pope says violence at the US Capitol must be 'condemned'
Pope names 13 new cardinals, includes 1st Black U.S. prelate
Pope endorses same-sex civil unions in new documentary film
Pope Francis says world cannot turn 'a blind eye to racism'
TOP STORIES
Police find items belonging to Brian Laundrie, apparent human remains
FDA OKs mixing COVID vaccines; backs Moderna, J&J boosters
Shooting victim drives several blocks, dies after crash in South LA
Garcetti to LA city workers: Get vaccinated by Dec. 18 or lose job
Port of Oakland offers to help ease SoCal backlog
14-year-old boy killed in Apple Valley hit-and-run; suspect sought
LA City Council votes to suspend Mark Ridley-Thomas from office
Show More
Walkout at Netflix over Dave Chappelle special brings out dozens
New technology battles climate change by using sand to absorb carbon
Roscoe's Chicken N' Waffles dedicates day to give back
Video: Volcano in southern Japan erupts with massive smoke column
Facebook planning to change its name, report says
More TOP STORIES News