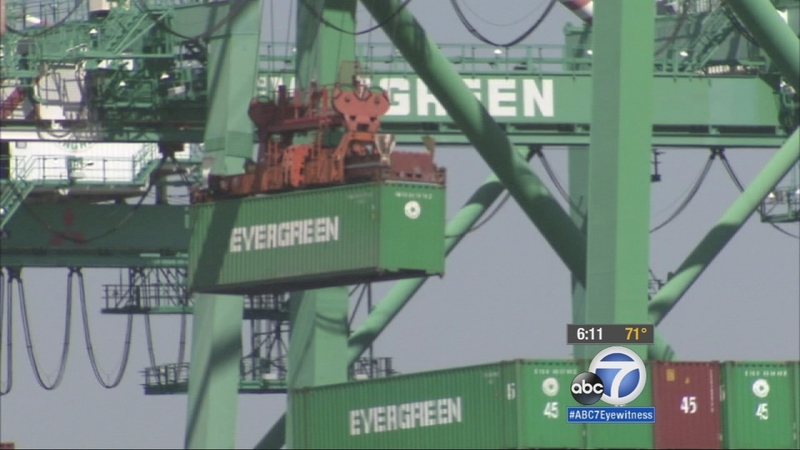 LONG BEACH, Calif. (KABC) -- There are new calls for a swift resolution to the labor dispute impacting west coast ports, including several here in Southern California where a partial shutdown is taking place through the weekend.

At Island Batik in Carlsbad, there are empty boxes and shelves.

The latest shipment of quilting fabric from Indonesia is sitting on a ship at the Port of Long Beach. The company owner said he is low on inventory to send out to retailers and that other businesses are hurting.

"I'm hearing of everyone being down anywhere between 10 and 15 percent in revenue. I'm hearing of layoffs - up to 20 percent of their work staff," said Caleb Willis, president and CEO of Island Batik.

The labor dispute between shippers and dockworkers has delayed shipments in and out of ports along the coast.

It is especially serious for those who transport fruits and other produce. In the Central Valley, many oranges are ready for harvest, but aren't being picked. Some quickly mature and are just dropping to the ground. Joe LoBue of LoBue Citrus said many containers are waiting at the port.

"I would say we're probably going to lose 20 to 25 percent of our export, at least, and that's if it gets a little better," LoBue said.

At the Port of Los Angeles, many cargo ships are parked at sea, and 27 of them are just waiting to be unpacked.

"That's why I've been so involved with both sides of this, urging them to quickly wrap this up. We can't afford to have these boxes piling up on our docks," Mayor Eric Garcetti said.

Lawmakers in Sacramento are calling on President Obama to get involved and push both sides to form a settlement.

"We have 30 percent of our exports that go out of California. We have 40 percent of our containerized traffic that comes in through our ports, and when we slow that down we slow down the whole economy," said Sen. Bob Huff (R-Diamond Bar).

Union officials said that both sides are close to an agreement, but would not say what is holding up the deal. The dispute has been going on for nine months.